"Since as far back as I can remember, my family and I have been heavily involved in three things: Agriculture, Energy, and Public Service.  My dad once told me that, as farmers, if we didn’t weigh in on the things that we believe in, somebody would be sure to weigh in for us, and that we most likely wouldn’t appreciate the outcome.  It was instilled in our family from an early age that we must be the change we wished to see.  This conversation I never forgot, and as you can see from my experiences those words have heavily influenced my life journey."  -Graham P. Christensen, Founder and President of GC Resolve 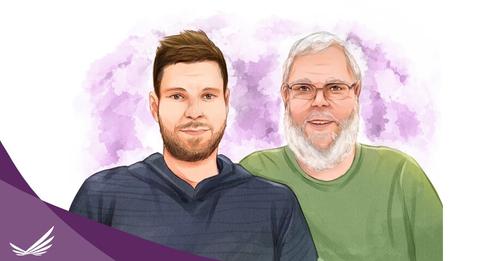 4th-generation family farmer Fred Christensen has seen the impacts of climate change on his Nebraska farm. Increased rainfall and snowmelt in early March 2019 led to extreme floods that ravaged the Midwest. In Nebraska, flooding put residents and their livelihoods in danger, leading to evacuations and over $440 million in crop losses. Fred and his son, Graham, discussed these challenges and the climate-friendly adaptations they’re making. Improving the way farmers use and manage soil through regenerative agricultural practices can help protect crops from climate change that is already underway from past emissions; capture and store carbon to reduce future climate change; and even make food more nutritious.

Christensen Farms was homesteaded in 1867, making Graham and his brother Max, the 5th generation of farmers in the long-standing family tradition.  On the farm, the Christensens primarily raise non-gmo corn and soybeans and have implemented conservation techniques to save water and build soil organic matter including no-till and cover cropping.  The Christensens have started utilizing permaculture through the plantings of many varieties of fruit trees and shrubs, including a micro-orchard with three varieties of hazelnuts.  The Christensen's have a 25kw solar system that helps power the operation.

In 2002, Christensen graduated with a Journalism Degree at Midland Lutheran College (Fremont, NE).  GC Resolve utilizes the art of communication to grow information networks in order to help get the good word to more Nebraskans.  Please follow our social media or opt into our email list so we can ensure you are staying up to date on GC Resolve's important work.

In the early 1990's, Christensen Farms employed Mexican farmers to help manage their crops.  Many of these immigrants fled to Midwestern farms after bad U.S. policy had bankrupted their operations in Mexico forcing a northward migration.  Many of the Mexican farmers also took jobs at local meatpacking plants, who lowered wages for the newly arriving workforce depressing the strong rural middle-class and creating misunderstandings around immigration issues.  It became clear at an early age how bad federal policy can negatively impact and divide so many people.  These early experiences reinforce the justice focus at GC Resolve, and GC Resolve believes these issues can in large part be resolved with good policies.

Around 2005, Christensen started to understand the threat of rising emissions to the planet to be serious, and devoted his life to helping farmers and ranchers become leaders in efforts to drawdown rapidly rising emissions.

From 2007 - 2009, Christensen helped enroll 1.1 million acres of Nebraska land into the Farmers Union Carbon Sequestration Program which rewarded farmers and ranchers for soil health practices proven to reduce greenhouse gas emissions. From that experience, it became clear that farmers were poised to be a part of the solution for halting rising emissions by increasing bio-diversity and grazing on their operations.  GC Resolve continues to be involved in strategies to help farmers and ranchers participate in new programs designed to safely put farmers in a position to capture carbon and build soil health.

While working with the Nebraska Farmers Union, Christensen assisted farmers and ranchers in organizing against the Keystone XL Pipeline.  Christensen and GC Resolve have partnered with numerous Nebraskans, and fossil pipeline fighters all across the world, to stop tar sand development from threatening frontline communities, as well as Nebraska's great water resources.

Burt County Wind LLC is a 22-member group of Burt County, Nebraska farmers that was set up in July of 2010 with the purpose of helping our county develop its alternative energy resources in a safe and efficient manner.  The goals of Burt County Wind are to harvest local renewable energy resources to meet growing energy and ecological demands, reduce our property tax burden, better fund our schools and county services, and produce low-cost energy for Nebraska utilities and businesses.

In 2015 and 2016, GC Resolve helped educate Nebraska farmers, with Domina Law, about the recent Syngenta Lawsuits. Farmers that participated in the mass action lawsuit were awarded a large settlement. GC Resolve is always working to protect the interests of family farmers.

GC Resolve is a proud co-founder of the RegeNErate Nebraska network, which was founded in 2017. RegeNErate Nebraska is a network of farmers and ranchers, tribes, urban farmers, supporting businesses, organizations, food consumers, and communities who are committed to a shift away from extractive industrial food production in favor of an ethical and regenerative food system. RegeNErate Nebraska's mission is to redevelop and strengthen our communities from the soil up.

Degrading water concerns have hit home for Christensen as he has seen contaminants increase in his family's own wells, as well as in area surface water.  These personal experiences, shared with many friends and neighbors, is a key driver behind GC Resolve's efforts to co-develop the Citizen Scientist Water Testing Program.  Key partners include the University of Nebraska Lincoln Department of Civil Engineering and the University of Nebraska Medical Center Department of Environmental, Agriculture, and Occupational Health, and Nebraska Communities United.

GC Resolve is making policy cool again.  But for this to happen, young and diverse people must have a seat at the table, and integrity must be returned to the political process.  GC Resolve prioritizes bringing that creative and youthful energy into the agricultural, energy, and environmental conversation, and has over a decade of experience in bill drafting, educating the general public on issues, activist organizing, and lobbying leaders in both the Unicameral, and in the Nation’s Capitol.