A 5,000-Tractor Farmer Army: The Legacy of Tractorcade 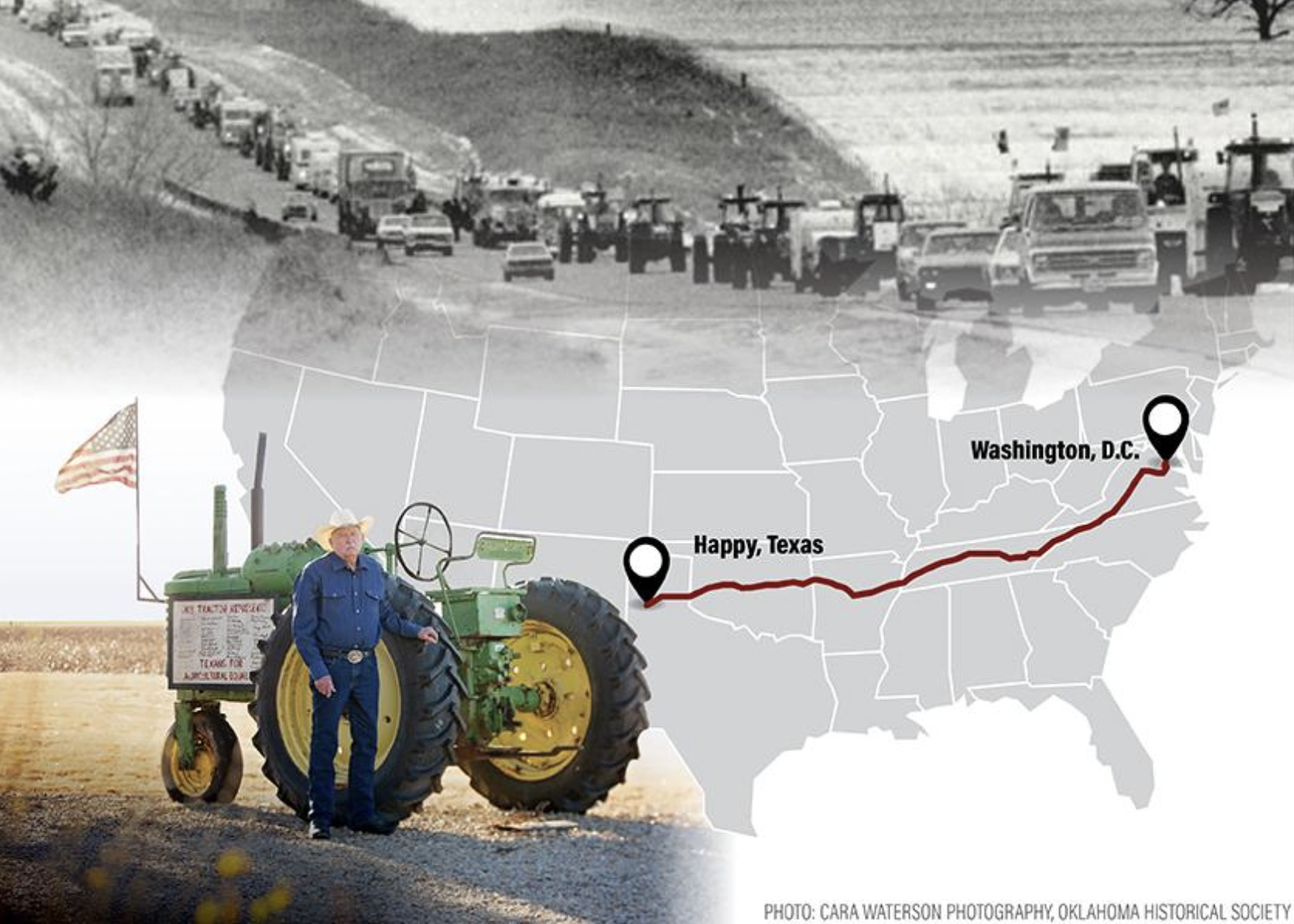 Eating wind for 1,800 miles, Don Kimbrell crossed a country in 21 days, driving a John Deere G into history. He rode in Tractorcade — a 5,000-tractor farmer army that rumbled into Washington, D.C., in 1979, and occupied the National Mall, demanding political attention to address an agriculture industry in collapse.

“I’d drive it all again right now, but my body wouldn’t stand the wear,” says Kimbrell, 78. “I was only 36 when I started that cross-country trip, but when I finished, I was an older man than I am right now.”

What compelled a farmer to rage against the political machine?

“Farming was dying while the government denied us a level playing field, but like so many other farmers at the time, for the sake of our country I couldn’t sit back and let it happen,” Kimbrell emphasizes. “At some point in life, everyone answers a question, ‘What are you willing to do?’”

Kimbrell, the fourth in his family to farm, married his equal in mettle, Carolyn. The couple raised four sons, Kyle, Shawn, Casey and Heath, on 800 acres in Happy, Texas.

By the mid-1970s, producers began feeling the sting of subsiding crop prices and rising costs — a chronic pain that outlasted the typical vagaries of commodities and moved the market from the doldrums to a genuine rut.

U.S. farmers watched $13 billion of agricultural income disappear in 1977, according to USDA.

“By the late 1970s, all you could do was cover expenses,” recalls David Senter, a farmer from near Fort Worth. “You focused on survival, and you couldn’t think about buying land, but most of us just stood around complaining. Misery loves company.”

THE START OF A MOVEMENT

September of 1977 marked the end of talk, when five farmers seeded the American Agriculture Movement (AAM). At a diner in Campo, Colo., a quintet of growers commiserated on their economic troubles.

“They were bellyaching,” Senter says. “They were letting out a never-ending chain of, ‘How are we going to see tomorrow?’ A truck driver walked over, looked them in the eye and said, ‘I wish you farmers would stop bellyaching and do something.’”

Challenged to action, the five Baca County growers called a local meeting to address the plight of family farms.

“The meetings jumped from town to state to across the country,” Senter says. “It was a raging prairie fire like nothing ever seen in agriculture.”

AAM, Senter emphasizes, was a movement and not an organization.

“By 1978, USDA reported 1.5 million farmers were involved in AAM. At that time, we coalesced around two basic principles: One, parity: A fair price on crops to just cover the costs of production and enable a farmer to make a survivable living. Two, country of origin labeling (COOL).”

The groundswell of grower response was an outlet for frustration, Senter says: “When you have desperate men losing family land or watching their children’s future slip away, they can turn to violence really fast. Instead, AAM gave farmers an outlet, and they knew they weren’t alone.”

At a 1978 AAM meeting in Texas, Gerald McCathern, a farmer from Deaf Smith County, Texas, proposed a preposterously massive Tractorcade.

“If the politicians won’t listen to our lobbying, let’s just drive our tractors all the way to their doorstep,” McCathern said. “I guarantee that will get their attention.”

McCathern’s outlandish idea exploded with the electricity of old-time revival. Four interstates were selected as the main thoroughfares: I-20 Lubbock, Texas; I-40 Amarillo, Texas; I-70 Denver, Colo.; and I-80 Cheyenne, Wyo.

Breaking off matchstick pieces to correspond with 100-mile scales at the bottom of road maps, McCathern, Senter, Kimbrell and others placed the sticks end-over-end across the four routes, estimating 100 miles of travel per day at approximately 20 mph.

Each caravan was led by a designated wagon-master tractor. The vehicle order stayed firm.

“The first tractor to leave was the first to reach D.C.,” Kimbrell says. “If you were point, you were the hot-nosed hound the whole way. As we rolled across the country and people joined in, they would take the next spot at the back.”

The tractors were accompanied by a cavalcade of campers, fuel trucks and scouting pickups.

“It was something to behold,” Senter says. “On I-20, just for example, by the time we got to Georgia, we were 20 miles from the first tractor to the last tractor, and we kept growing and growing all the way to D.C.”

McCathern, lead dog on the I-40 route, also served as national wagon-master, driving an International Harvester 1486. (In 1986, the IH 1486 was obtained by the Smithsonian and remains in the museum’s possession.)

In state after state, throngs of supporters gathered to cheer, wave signs of support and exhort the caravans.

“People were so good that it’d move you to tears,” Kimbrell says. “They were everywhere along the roadsides. It’s important to know, many of these supporters were not farmers, just Americans who appreciated us.”

On Monday, Feb. 5, Tractorcade descended on Washington and brought the city to a halt. The kettle was at a boil, and amid protests, police clashes, tractor burnings and genuine unrest, the threat of violence was palpable, according to Senter.

“Things were tense,” he says. “One of our guys lost an eye because they broke out the windows of his tractors with batons. We weren’t out to hurt nobody, and once they realized that things calmed down.”
Rather than herd cats, authorities decided to concentrate Tractorcade at the National Mall.

At first blush, Kimbrell and Senter were dismayed by the corral, but realized a major reversal of fortune. The cohort of farmers were suddenly within walking distance of every representative and senator in Congress.

“They made a mistake and stuck us in the best campground ever,” Kimbrell adds. “We weren’t going anywhere, and what were they going to do, anyway? Arrest us all?”

In February, March and into April, AAM farmers attempted to hold politicians accountable, petitioned USDA and ensured their presence was impossible for the media to ignore.

“Every day, we were given a folder, and it contained a senator and congressman,” Kimbrell says. “We’d go to those offices and ask to be heard. Some gave us an ear, and some didn’t. Walk, talk and move on — we didn’t go that far to waste time or play.”

The public realized we were there for the right reasons, Senter recalls.

“A 2' snowstorm slammed D.C., and guess who towed fire trucks, cleared paths for ambulances and transported doctors and women in labor? A bunch of farmers in tractors parked on the National Mall,” he says. “Also, every Sunday afternoon, we invited D.C. families to the mall and gave the kids tractor rides.”

What was the condition of the mall after the prolonged presence of massive tractor tires? A farmer replant:

“We provided the seed and reseeded the mall,” Senter says. “Come spring, we chiseled, disked and plowed the mall all the way from the Washington Monument to the Capitol.”

What is the legacy of Tractorcade now that four decades have passed? “If Congress would have listened, we would never have had such a terrible farm crisis in the mid-980s that took out half of our family farms in the U.S. and collapsed rural America,” says Senter, current AAM president.

Nonetheless, Tractorcade cemented AAM as a movement and became a benchmark moment for populist farm change.

“AAM saved so many farmers because they learned how to get involved and speak up,” Senter says.

Almost 42 years beyond Tractorcade, Kimbrell ponders: “Did we do any good? Maybe the young guys don’t know it, but the safeguards in place now are partly a result of farmers sounding the alarm in the 1970s.”

A tattered sign that rode on the fabled G hangs on the wall of Kimbrell’s office: This Tractor Represents Texans for Agricultural Equality.

“I see the John Deere G every day, and it takes me back in time,” Kimbrell says. “I see faces of farmers with vision, ability and backbone. Most all of the faces are gone now, but what they did will never be gone.”
Complacency, he warns, is the No. 1 enemy of ag’s current generation.

“The people who make our laws need to hear from us nonstop,” Kimbrell says. “A government of, for and by the people can never work unless the people are willing to commit to action — and that means farmers.”

Kimbrell’s pointed challenge bears repetition: “At some point in life, everyone answers a question, ‘What are you willing to do?’”