Graham Christensen grew up immersed in values of public service, integrity, education and all the responsibilities that come from work on a family farm. His family farm, established in 1867 under the Homestead Act, operates on about 800 acres in his hometown of Oakland, just north of Fremont.

Christensen also grew up in the era of the 1980s farm crisis, where he learned the value of hard work. He came to understand that when a person runs up against difficult times, maintaining the ability to speak out for what you believe imparts great purpose and impact on individual’s own circumstances, as well as on the surrounding community. 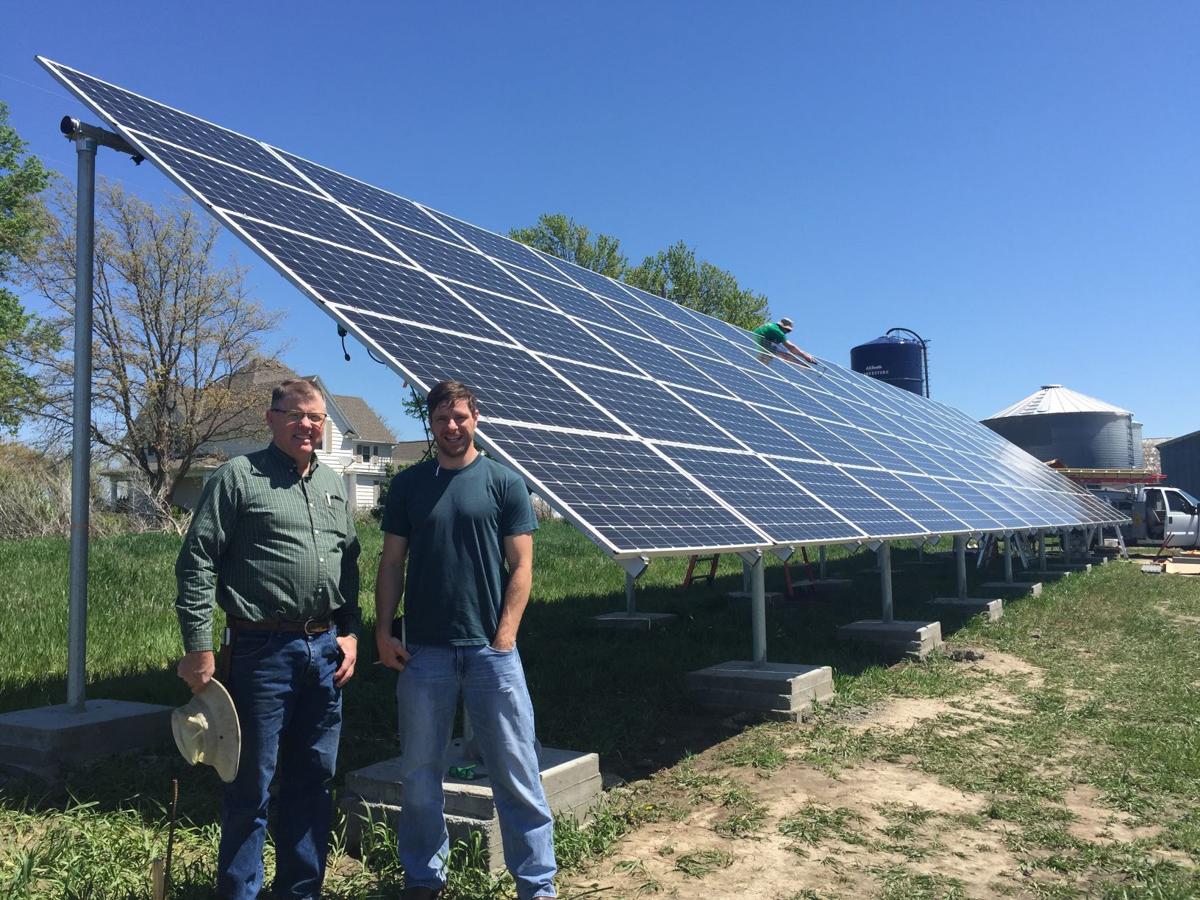 Graham Christensen, founder and owner of GC Resolve, works at a grassroots level to make his community a more sustainable place.  Here he is working on a solar project for a Nebraska family farm.

Christensen remembers well, an important value his father implanted in him as a young boy.

“My dad told my brother and me that it’s important to be involved in the public process and public service because as farmers, if we’re not involved somebody else will be involved for us,” Christensen said. “I never forgot that.”

Now at 36, Christensen runs the company GC Resolve, an organization dedicated to upholding that same foundation of values through public service, community, compassion and innovation. As the founder and owner of GC Resolve, dedicated to the core merits of education, community and organization, Christensen works on a variety of projects, topics and grassroots community movements. His work helps promote and uphold principles of a sustainable community such as solar and wind energy, clean water and sustainable agriculture.

Christensen recognizes that the environment and its resource represent finite commodities, and some of those commodities, like water are vital to human survival. His company looks to the future and declares:

“We need to come up with some creative ways to meet our needs,” Christensen said, adding that diversification will allow us to be less dependent on those limited commodities as well as those resources harmful to the environment.

Two solar projects, both completed in the last year, provided valuable energy and savings for two farms in Nebraska. The first, finished in October, entailed a 10 kilowatt solar panel installation which provided enough energy to support about half the needs of a family farm just outside the small Village of Craig. The second project, completed in May, consisted of a 21 kilowatt solar panel installation providing for a majority of the energy needs on a farm in Minden.

Christensen said solar- and wind-distributed projects, like the ones in Craig and Minden, enable farmers to save money by using natural resources while at the same time garnering the economic benefits that such technology allow for, especially in a state like Nebraska which operates under a public power district structure.

Christensen also highlighted the importance of capitalizing on the knowledge and advantages that farmers can offer in renewable sources of energy, food and water.

“All of us working together can meet some of those energy goals. And the people with the most immediate access to those natural sources are our farmers, ranchers and rural communities,” Christensen said.

He learned the significance of working together long before he started his company. From the family farm he attended Midland University and earned a Bachelor of Arts degree in Journalism. He then headed out to California, searching for a career in the news-making business. But it only took a month before he realized his providence lied elsewhere.

“No way,” Christensen said referring to a life in California. “Nebraska is my home … this is where I belong.”

Thus, he returned to his roots and never looked back. For a period he bounced around: from steel construction on grain elevators to waiting tables in Omaha; then a three-year stint in agriculture financing before finally landing a job on Senator Ben Nelson’s campaign. During the campaign his interests were drawn to topics of climate change, renewable sources of energy and the support Nebraska farmers.

“It seemed obvious to me that farmers should be leading the fight in climate change,” Christensen said.

“I got the greatest education I could ever have I agriculture policy and energy policy,” Christensen said about his work at NeFU. “The institutional knowledge (at NeFU) is unparalleled … I met a lot of farmers and ranchers over those years.”

He went on to work with projects involving carbon sequestration, campaign manager for Omaha attorney Dave Domina’s run for senate as well as efforts in the very initial days of the Keystone XL pipeline controversy. It was around that time that Christensen’s visions on what would eventually become GC Resolve began to solidify.

“There are so many questions unanswered,” Christensen said. “GC is all about the fact that education is the foundation of our communities. We need to make sure that everyone has proper access to information and is knowledgeable about the things that affect them.”

“Some people know that they are going to be a doctor, a firefighter, a lawyer … or a farmer … but for me, I’ve never known … I’ve always felt inclined to try and use my skills to help people out. That is what really fulfills me,” Christensen said. “When I look back some day, when I have that ‘reflection moment,’ I want to be able to look back and know that I helped, and was on the right side of history.”