As Nebraska’s brand-new Costco chicken processing plant begins sending birds down the line in Fremont, residents are escalating their protest against the company by pushing for a statewide moratorium on new concentrated animal feeding operations (CAFOs). 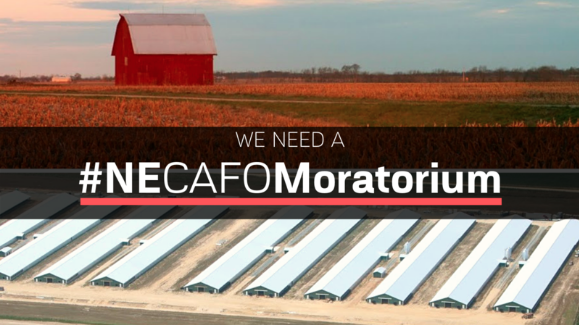 A petition for the moratorium launched Tuesday, just before a contentious zoning board meeting in Saunders County, which is just south of Fremont, at which board members approved a 12-barn poultry operation that will grow chickens for Costco and be run by an out-of-state investor. The conflict has caught the attention of Gov. Pete Ricketts, who late Tuesday night released a press statement calling the moratorium supporters “radical anti-agriculture groups.”

Since Costco announced in 2016 that it would open a poultry plant in Fremont, many residents have been concerned about the number of chicken farms that have sprung up to serve the plant. Nebraska has never had large-scale poultry production. Now, barns holding more than 47,000 chickens at a time are being built across the eastern part of the state and into western Iowa, and their neighbors are worried about water, air, and noise pollution.

These concerns have unified a coalition of advocacy groups, some formed over the past several months to educate the communities about the potential harms of large-scale livestock farming. The groups calling for the moratorium on Tuesday included Nebraska Communities United, Lancaster Hill Alliance, RC Communities United, Elmwood First, Community Advocates for Responsible Agriculture, and the Nebraska Sierra Club.

“Costco’s new extreme form of vertical integration jeopardizes the public’s health and well-being, and [the] extractive industrial food system puts our farmers at risk with unethical contracts, with the development low-wage/low-class systems in our rural communities, and also by toxifying our water resources,” wrote Melissa Baker and Graham Christensen of environmental consultancy GC Resolve in a press release announcing the moratorium petition. “This form of agriculture does not meet Nebraskan’s high business standards and therefore companies that practice this extreme form of food production should not be allowed into our communities.”

Commenting on the moratorium, Jessica Kolterman, a spokeswoman for Lincoln Premium Poultry, a company formed to run Costco’s processing plant, said, “It’s unfortunate that there is such a limited understanding of the positive impact of livestock in Nebraska.” She said that the moratorium probably wouldn’t affect Costco-related operations, which are “already approved or in the final stages of being approved.”

The push for a moratorium comes soon after a news report that 132 barns linked to the Costco plant have been proposed by a single out-of-state operator. The barns comprise nearly a fourth of the 520 Costco has said it needs to supply its plant. Community members say the concentration of so many barns in the hands of one person undermines Costco’s purported mission to use its poultry plant to bring jobs to Nebraskans.

“Costco and Lincoln Premium say this is about family farming; about bringing the next generation back to the family farm. However, their actions speak differently,” said Randy Ruppert, of Nebraska Communities United, in the press release. “They are bringing degenerative farming to Nebraska, nothing else. If Costco and LPP believe what they say, then we Nebraskans challenge them to enact the changes the people of this state are asking for while bringing honesty and transparency and good old Nebraska morals to the table.”

Kolterman says that local farm families have been engaged in partnership with the North Carolina-based company, Gallus Capital LLC, that is behind the 132 barns. “So regardless of their engagement in this project, local farm families are still benefiting from these contracts,” she says.

On Tuesday, the Saunders County zoning board approved 12 of those 132 barns at a highly-anticipated, packed hearing. The board heard from proponents and opponents of the operation for several hours, ultimately voting 4 to 2 in favor of the farm. Absentee farm management was a key concern of those opposed to the CAFO. Other concerns included degraded air and water quality, health impacts, and increased truck traffic.

“I am no stranger to strange smells and [other] agricultural issues,” said Maureen Freeman Caddy of Community Advocates for Responsible Agriculture, which is opposed to the CAFO, at the hearing. She and others expressed concern about the sheer number of chickens that will be housed on the farm and what will be done with waste, including chickens that die before slaughter. “We’re talking about 3.4 million broilers per year in this particular facility,” she said.

In earlier stages of the project, Lincoln Premium Poultry said it would be contracting with 100 to 125 farming families to raise its broilers in four-barn farms across the state. As of July, Kolterman said that the company had nearly all the farmers it needed, but estimated that only some 70 farmers were contracted with the company. That discrepancy in farmer recruitment appears to be in part explained by the larger farms. Several of the operations proposed by Gallus Capital, for instance, are 12- or 16-barn operations. Those farms could house as many as 570,000 to 760,000 chickens in each flock, and several million chickens each year.

Proponents of the CAFO at the zoning board hearing included representatives of the Nebraska Soybean Association and Nebraska State Dairy Association, several local farmers, and the owner of the land leased by Gallus Capital. They argued that the new wave of poultry farms will aid in keeping farm families on their land and spur economic development.

A moratorium on CAFOs isn’t a new idea in Nebraska. Twice in the past year, Lancaster County has considered a moratorium on new chicken operations. Both times, county commissioners shot it down. Residents have also asked for greater regulation in the chicken farm approval process, which currently requires chicken operations to simply obtain a special permit after which they receive very little oversight.

The call for a statewide moratorium sparked the ire of agribusiness-friendly governor Pete Ricketts, who has long supported Costco’s poultry operations in the state. In a statement late Tuesday night, he said that “[t]he out-of-state environmental lobbying groups rallying opposition against our family farmers in Nebraska are anti-agriculture.” He called the moratorium effort “a part of the ‘meat is murder’ movement led by radical groups who want to end livestock production around the globe.”

The environmental and community groups calling for the moratorium are all Nebraska-based, and many are led by lifelong Nebraska residents and farmers.

Costco’s Fremont plant will produce about 40 percent of the company’s broiler chickens. Kolterman estimates that the plant will open with 500 employees, and eventually scale up to 1,000 employees at full production.