FREMONT — Costco’s rotisserie chickens are so popular that fans of the roasted fowl started their own Facebook page, a page that now has more than 17,000 followers.

The cooked birds, which cost $4.99 apiece, are such a draw for the warehouse retailer that it chose Nebraska to launch its first venture in growing and processing its own chickens for its stores. 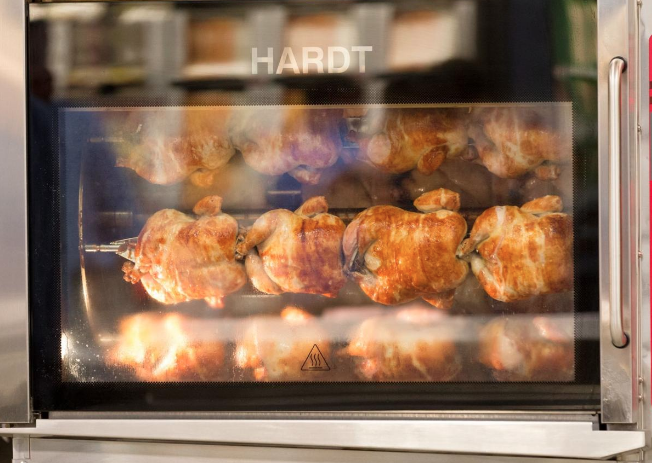 A $450 million campus of buildings that opened recently in Fremont will eventually process 2 million chickens a week, or about 100 million a year, enough to supply a third of Costco’s demand for both roasted and fresh chicken. The complex will also eventually employ 800 workers, have a network of 520 chicken barns and require the equivalent of 2,000 acres of corn and 2,000 acres of soybeans every week to feed those hungry chickens.

But the plant, which celebrated its grand opening on Saturday, still draws mixed reviews.

On one side, advocates like Gov. Pete Ricketts say the Costco plant hits the sweet spot for economic growthby providing new opportunities for farmers to grow chickens, provide grain and keep their kids on the farm, while generating hundreds of jobs in “value-added” agriculture.

“This is really a great opportunity to grow an industry,” Ricketts said last week.

When asked about rumors that Costco might be eyeing Nebraska for a second chicken-processing plant, the governor said the state “would certainly love that.”

“What we’re focused on (now) is making sure their experience with this (Fremont) plant is a great one,” Ricketts said.

But there are others who see Costco’s arrival as much less than great. One coalition has called for a moratorium on construction of new chicken barns until state and local zoning and environmental rules catch up with complexes that will host up to 760,000 birds at a time.

They question whether the contract growers who sign up to produce chickens for Costco will all benefit, and worry about the health risks and environmental impact created by the chicken barns, which the John Hopkins University Center for a Livable Future estimated would generate 3.9 million pounds of manure a day, about twice the solid waste generated by the City of Omaha.

“This is not a regular (concentrated animal feeding operation). It’s the size and the scale. It’s not a family farm. It’s extreme,” said Melissa Baker of Lincoln, a leader in one of the groups, GC Resolve, that is opposing an eight-barn complex a mile from Raymond Central School in Lancaster County.

The complex, which goes before the Lancaster County Board next month, is unanimously opposed by the Raymond Central school board, which expressed concerns about increased heavy truck traffic and depletion of underground water supplies for the school.

Ricketts and other Costco supporters maintain that the opposition is fueled by out-of-state, radical environmentalists, who are anti-meat.

But Baker disputed that. Her husband, she said, grew up on a farm, and she said that opponents are local residents, including many farmers. They are concerned, she said, about the huge size of the chicken barn complexes, and concerned about a future in which a huge corporation like Costco dictates the profit and practices of farmers.

“We are not interested in shutting down family farms,” Baker said. “We just want a freeze and hold until our regulations are updated.”

Jessica Kolterman of Premium Poultry, the firm managing the Fremont plant and contracting with the chicken growers, said there were only “pockets” of opposition to the 520 barns, which are spread across 20 counties in eastern Nebraska and western Iowa. Now, she said, there’s a waiting list of people seeking to build barns and grow chickens for the Costco plant.

The “odor footprint” of the barns is only about a quarter-mile, and Kolterman maintained that the manure — actually a wood-chip litter mixed with chicken waste — has less potential to be washed away than synthetic fertilizers.

She added that Costco asked for additional state environmental regulation that requires chicken growers to obtain the same state permit as operators of feedlots and hog confinement complexes, which includes monitoring the disposal of the litter from the barns. Truck traffic generated by the barns, Kolterman said, should be no more than during crop harvest seasons.

About one-third of the chicken barns are now producing, using chicks hatched at the Costco plant and fed feed milled there.

“We’ve checked every single box that we’ve ever been asked about,” she said.

As of last week, the Costco plant had 550 employees, an increase of 150 since the plant opened on Sept. 9. Hiring of a second shift of workers is expected to begin in February, with full operations expected by the end of summer 2020.

Kolterman said that 97% of the workforce has so far been hired from the local area. She cited better wages (the lowest starting wage is $15 an hour plus benefits), better opportunity for advancement and the ability to avoid a commute outside of the area as some of the reasons.

The migration of workers to Costco has impacted the workforce at other Fremont businesses, according to Garry Clark, executive director of the Greater Fremont Development Council.

But the area already had labor shortages, and the opening of the plant has spawned an increased effort to lure and train workers and to increase housing, he said.

Kolterman said that the size of the chicken barn complexes in Nebraska, up to 16 barns each with 47,000 birds per barn, is moderate compared with other states, which have farms twice that size.

“It’s just not something that people are familiar with,” Kolterman said.

One of the Costco growers, Bruce Williams, came back to the Morse Bluff farm of his childhood in 2005, and signed a contract for Costco because it was a way to diversify his corn-soybean farm, and a way to possibly keep one or more of his four children on the farm.

“We’re a family farming operation that wants to produce a safe, domestic food product for U.S. citizens to eat,” Williams said. “That’s what we’re supposed to do as farmers.”

His 12-barn complex overcame opposition from some neighbors, though he said he’s fielded plenty of comments, often confidential, that support his endeavor. The chicken complex won approval on a 5-2 vote by the Saunders County Board earlier this month on the condition that Williams install a retention pond for runoff, plant a barrier of trees to contain odor and dust, and provide a fire hydrant in case of fire.

He said he purposely located the barns “in my own backyard,” within 3/8ths of a mile of his home, to avoid criticism.

“What’s frustrating is that people want to eat a safe, domestic food supply, but a lot of people don’t want it produced near them,” Williams said.

He said he initially looked into building an eight-barn complex, and had consulted with his local banker. Then he learned of a North Carolina investor, Jody Murphey, who was willing to bankroll chicken growers. Williams said he looked into Murphey’s background and met with him in Nebraska, before agreeing to a 15-year deal to finance a larger complex of 12 chicken barns. The barns, costing $7 million to $8 million, would be paid off by the time his children are ready to take over.

“For us it was just like getting a loan from the bank,” he said, adding that it would have been too expensive to get into growing chickens if not for his contract to supply the Costco plant.

Williams called the requirements put on contract growers no different from the risks he takes in growing corn and soybeans.

“We have to produce a quality product that people will want to buy,” he said.

But critics say that Costco will have too much control over farmers, and that corporate domination of farming and farmers endangers the independence that rural life provides.

Graham Christensen, who heads up GC Resolve, as well as selling solar energy installations and being an environmental consultant, said he recently talked to a North Carolina grower who got crossways with the chicken plant he had contracted with. His contract was canceled, and now he’s stuck with a complex of expensive, and empty, barns, Christensen said.

“The contracts give them full control. ... You’re disposable,” Christensen said. “If there’s anything not quite right, they can terminate the contract at any time.”

He said that current state and local regulations concerning these “mega” chicken barn complexes are weak and inadequate, and urged Nebraskans to call for updates and improvements. He disputed the notion that the only way to stay in agriculture was to “get bigger.”

“That’s one vision, but it’s not the way it has to be,” Christensen said. “There are better ways.”

Former State Sen. Lee Rupp of Monroe, who still helps farm, lives just down the road from two 16-barn chicken complexes being built for Costco. He calls them chicken “factories” rather than barns — the two will host up to 1.5 million birds.

But, he said, the days when every farm had a chicken coop with a few hens are gone. Farms have gotten bigger, and farmhouses are fewer and farther between, which has meant fewer people, and fewer rural schools. The massive chicken barns are just part of those changes, Rupp said.

“We’ve seen the industrialization of the pork industry and now the chicken industry,” he said. “Whether we like it or not is immaterial.”