Report Back: Farmers Lead the Way in Addressing the Climate Threat 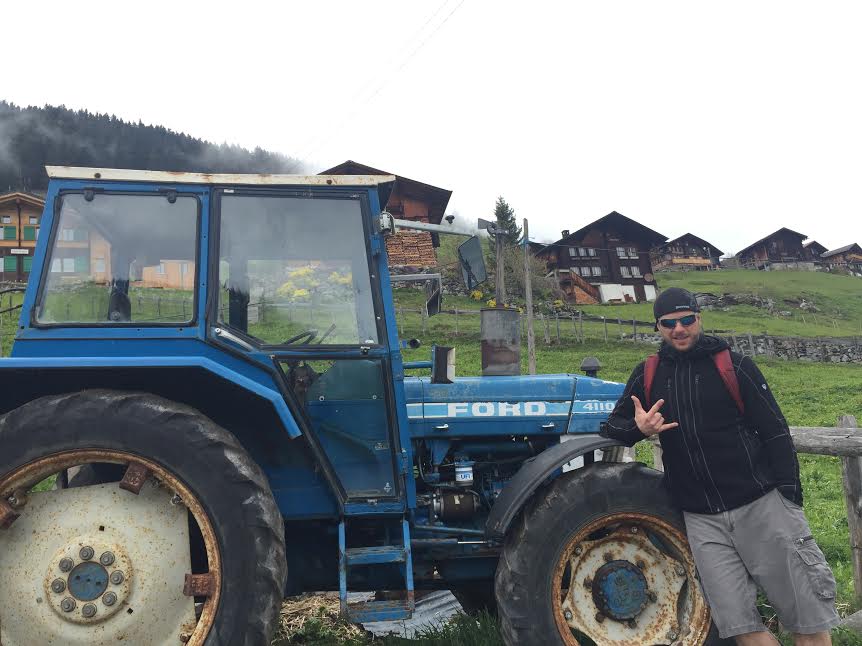 Here at Farm Aid, we know farmers are on the frontlines of climate change. So when our farmer friend Graham Christensen told us he was traveling to France for an international climate conference focused on farmers, we knew we needed to hear all about it. Graham is a fifth generation farmer in Nebraska who serves as the State Secretary for Nebraska Farmers Union and the President of GC Resolve, established to help educate and mobilize the general public to resolve key issues that affect the day-to-day lives of Nebraskans. Read his report back below!

Farmers and ranchers must play the lead role in reducing greenhouse gases, and efforts must be stepped up drastically over the next three years to prevent more extreme weather conditions caused by climate change. This was the urgent message at the latest round of global climate talks in Chantilly, France, called Sequestering Carbon and Soil: Addressing the Climate Threat, where scientists, academia, policymakers and rural leaders from 40 countries gathered.

The conference was the first of its kind in that it focused on farmers as the most important players in reducing greenhouse gas (GHG) emissions. Why? Because agriculture is the largest contributor to rising GHGs levels and poor farming practices have contributed to the degradation of 25% of the world’s lands. The undeniable consensus was that carbon storage is critical to addressing climate change, and adopting farm-based carbon sequestration techniques is a key path forward.

A presentation called Drawdown: The Most Comprehensive Plan Ever Proposed To Reverse Global Warming focused on the astounding economic benefits of improving food production practices. According to Drawdown, global adoption of carbon storage practices will yield a lifetime savings of more than $10 trillion, far above the $777 billion it would cost to transition. Noted practices include regenerative and conservation agriculture, silvopasture, tree intercropping, managed grazing, degraded farmland restoration, composting, enhanced nutrient management, and more.

"It is in our DNA to work together with nature, not against it."

With collapsing commodity prices and the current Farm Crisis in full swing, now is the time for farmers to transition to these practices, which provide more economic opportunity while addressing the climate threat. U.S. farmers and rural economies will be massive beneficiaries in the transition.

For example, recent Iowa State research shows that when farmers adopt basic cover cropping techniques, they can eliminate 90% of their chemical fertilizer and 95% of herbicide applications—reducing the need for expensive inputs in a time of low commodity prices. By simply enhancing biodiversity on the farm, more carbon was stored in the ground, increasing microbial activity and soil organic matter, without greatly affecting yields. Farmers who utilize livestock in their crop rotation can add even more nutrients to the soil, further cutting input costs. With enhanced grazing techniques, methane and nitrous oxide emissions (both more potent than carbon dioxide) are reduced as well.

Another reason to adopt regenerative agriculture is to improve water storage capacity in the ground and provide filtration for our waterways. All we have to do is look back to Iowa, where over 750 waterways are impaired due to the over-industrialization of Iowan agriculture. In neighboring Nebraska, our groundwater nitrate levels have doubled over the last 40 years. Regenerative farming is our best chance to reverse these alarming trends.

Nitrate levels in Nebraska have continued to increase with the growth of agriculture industrialization.  Excessive nitrate exposure can cause health issues like Blue Baby Syndrome, and in some cases various forms of cancer, thyroid conditions, reproductive issues, and diabetes.

The conference also addressed the challenges of the current political atmosphere. The Trump Administration’s recent decision to pull out of the Global Climate Accord takes away America’s seat at the table. There undoubtedly will be limitations to upcoming Farm Bill discussions, and a carbon-pricing program looks to be a few years down the road. It seems that the quickest path forward for regenerative farming is via a serious dialogue with U.S. companies willing to help support and transition farmers, as is becoming more common in Europe. As consumers become more informed on how their food is produced, a natural evolution is for businesses to move toward supporting food grown with carbon storage practices.

The scientific consensus is that we are running out of time. So the question remains, how quickly will U.S. companies support our farmers in the transition? As I circle back with my farmer friends in Nebraska, it is clear that we farmers understand now is the time and that our participation in a full transition to regenerative farming is more vital than ever. More farmers are adopting these approaches every day, in part due to the growing consumer demand to know where their food is coming from, but maybe more so because farmers sense something is changing with Mother Earth. After all, it is in our DNA to work together with nature, not against.