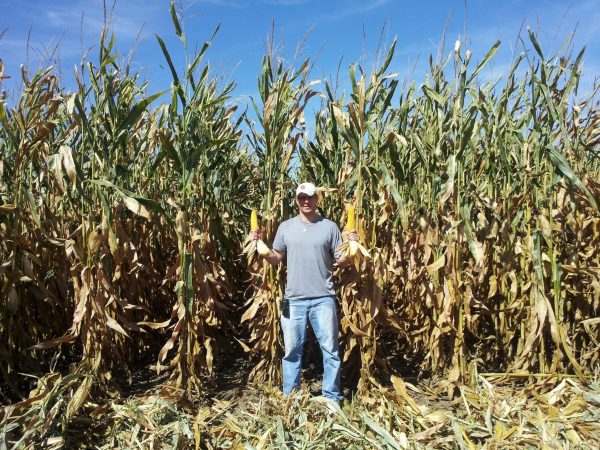 While U.S. agribusiness and biotechnology groups criticize and threaten Mexico over its bans on glyphosate herbicide and genetically modified corn, Midwest farmers like Graham Christensen say they would be happy to supply our southern neighbor with non-GMO corn.

“I think that would be a good idea,” says Christensen, a fifth-generation farmer in Lyons, Nebraska, who grows non-GMO corn and soybeans. “If their farmers aren’t able to produce enough themselves and they need extra, that would be an ideal market to move that grain down south. There are a lot of farmers up here who could easily transition to non-GMO corn, and there are a lot of us that are looking for a solid marketplace.”

“It’s up to each nation to determine their agriculture policies”

Last December, the government of Mexico’s President Andrés Manuel López Obrador issued a decree calling for the replacement of controversial glyphosate herbicide and imports of GMO corn in the country by January 31, 2024. Mexico’s Vice Minister of Agriculture Victor Suárez says the main reasons for Mexico’s bans are growing concerns about the safety of glyphosate and GMO contamination threats to Mexico’s staple and sacred crop—corn.

Mexico aims to increase its domestic corn production to compensate for lost imports of GMO corn from the U.S, which total 16.5 million metric tons (MMT) worth an estimated $3 billion.

Because of the potential loss of the Mexican corn market—the U.S.’s second largest corn export market after China—agribusiness groups, GMO seed/pesticide companies, and the U.S. government have pressured Mexico to overturn the GMO corn and glyphosate bans.

Karen Hansen-Kuhn, program director at the Institute for Agriculture and Trade Policy, says it’s Mexico’s right to determine whether they want to import GMO corn or not.

“It’s up to each nation to determine their agriculture policies; the policies that work best for them, both in terms of food production, environmental considerations, and how it benefits their people and livelihoods. It is Mexico’s sovereign decision how they want to manage their agricultural production.”

Darren Fehr, an organic farmer in Iowa, says it comes down to what customers—in this case those in Mexico—value.

“If Mexico makes that decision (to ban glyphosate and GMO corn), they are making it for reasons that are important to them,” he says. “It may not be for reasons that the vast majority of American farmers would agree. Nonetheless it’s their prerogative and privilege to do it.”

“The language that’s in the agreement says they should exchange information on agricultural biotechnology, but I would say it would be a pretty hard case to make that this is a violation of what’s in the USMCA,” she says.

“The U.S. can meet any demand that Mexico would request”

“The fact is that there is substantial non-GMO corn production in the United States that could fill that demand, if necessary,” Hansen-Kuhn says.

Ryan LeGrand, president and CEO of the U.S. Grains Council, was recently quoted as saying that Mexico’s GMO corn ban is a “real problem,” and that Mexico won’t be able to find enough non-GMO corn to meet their needs, citing lack of supplies in Brazil, Argentina, and Ukraine. But he ignores what’s growing in his own backyard. Non-GMO grain suppliers and farmers say the U.S. can easily supply Mexico with the non-GMO corn they need.

“Absolutely, the U.S. can meet any demand that Mexico would request,” says Ken Dallmier, CEO of Clarkson Grain, a supplier of organic and non-GMO grains. “It’s just a matter of giving the market enough time for the supply chain. We can easily do it; it’s not a big issue.”

Mexico’s corn imports from the U.S. account for less than 5% of the total U.S. crop, while 8% of the crop is non-GMO. In 2020, U.S. farmers planted 7.49 million acres of non-GMO corn, according to organic and non-GMO market data firm Mercaris.

“The U.S. farmer, ag associations, and export groups have a long history of listening to customers and delivering the products customers seek,” says Greg Lickteig, a grain industry consultant with Omaha Grain and non-GMO corn farmer.

Lickteig says the impact of supplying Mexico with non-GMO could have a positive ripple effect in the U.S.

“Maybe there will be a new focus on non-GMO or grain produced using regenerative and organic farming techniques or crops produced in ways that will reduce the carbon footprint. World consumers of corn products like Mexico have tremendous power to drive change,” he says.

“We should make it happen”

Graham Christensen has been growing non-GMO corn and soybeans on his 800-acre farm for the past 15 years. A soil health advocate, Christensen uses regenerative agriculture practices such as planting cover crops on his farm.

Interestingly, he has also stopped using glyphosate herbicide. While critics like LeGrand claim that Mexico’s crop yields will decrease by 20% to 30% without glyphosate, Christensen has seen no yield losses without the weedkiller.

“We don’t need glyphosate corn; we just don’t,” he says.

When asked about U.S. pressure on Mexico over the glyphosate and GMO bans, Christensen says: “If they are getting hammered by that, then some of us should speak up and say, ‘No, we’ve got this product and if you value this, we can supply it to you.’”

He would be happy to supply Mexico with non-GMO corn.

“Absolutely, if there’s a demand there, let’s find ways to partner with Mexico,” he says. “They’re that much closer, and they’re a trade partner. We should make it happen.”

Christensen says farmers in his area would join an initiative to supply Mexico with non-GMO corn.

“If we had a marketplace and if we had a year in advance just to make sure we got the seed ordered, we can be shipping rail cars of non-GMO corn down to Mexico to meet that demand. I don’t think it would be that difficult.”

Christensen has a message for Vice Minister Suárez who has said he would like to import non-GMO corn from the U.S.

“Tell him to keep Nebraska and Iowa in mind, we’re hungry for a partnership like that.”