Scientists Say: Climate Change Is Here and Nebraska's Not Immune - Impacts of warming climate felt from Nairobi to North Platte

GC Resolve supports Climate Change Nebraska, a new group led by young Nebraskans raising the awareness about the dangers of climate change and the impacts in Nebraska.  Here is one of the recent articles that features GC Resolve.  Enjoy! 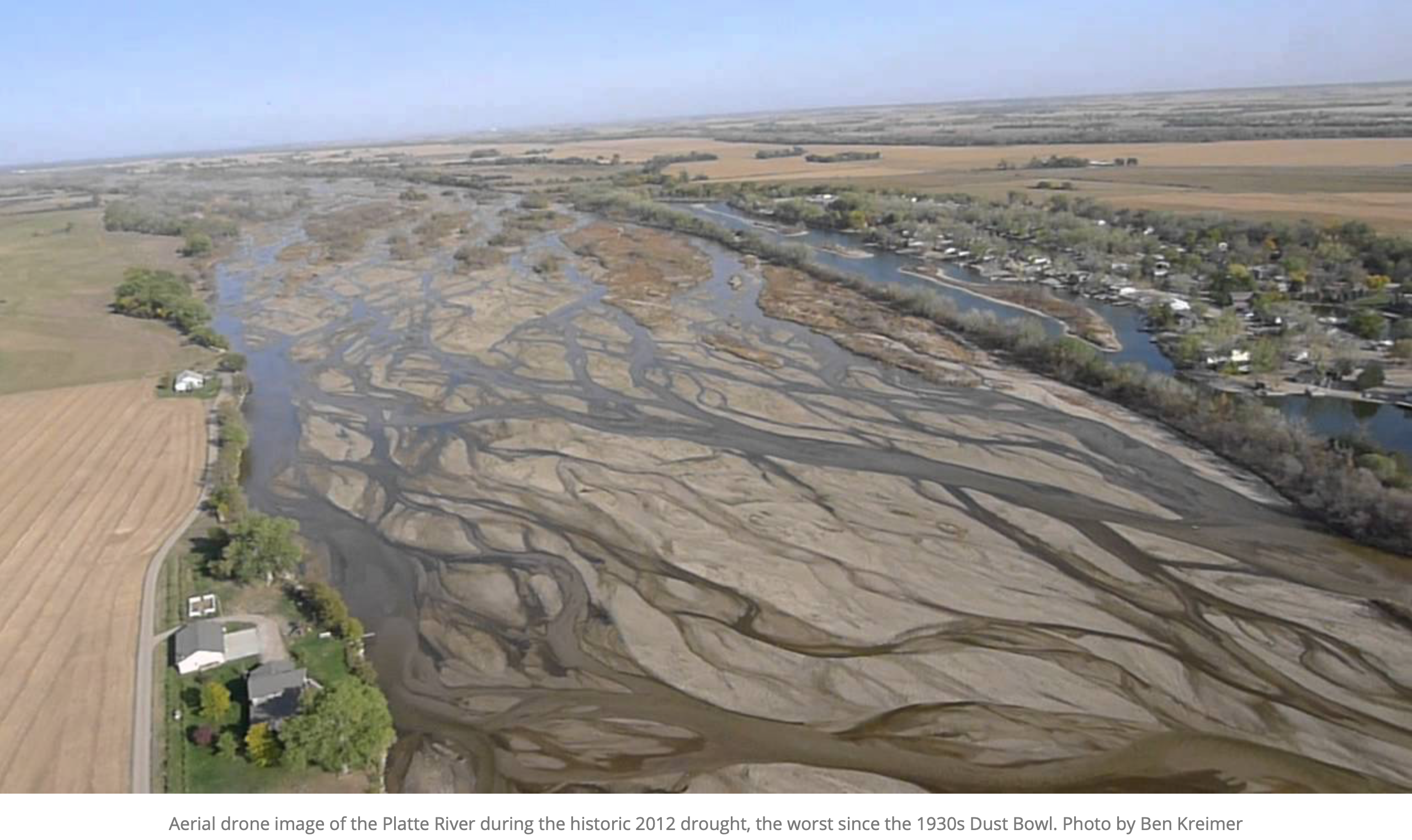 Eight-story-tall chunks of ice groan and grumble, plunging thunderously into the ocean, raising sea levels where 70% of the global population lives. Nine trillion tons of Earth’s glacial ice was lost between 1961 and 2016.

Farmers look on in horror as billions of locusts engulf East Africa, darkening skies and wreaking havoc on one of the world’s most impoverished regions, due largely to changing weather and climate patterns.

Globally, droughts have increased in frequency, severity and magnitude since 1900, leading to war, famine and death. In 2019, Cape Town, South Africa, started a countdown for when it would run out of water following years of drought and low reservoir levels.

Venice, Italy, was brought to its knees in November 2019 with its worst flooding since 1966. Worldwide, floods accounted for about 40% of all losses due to natural catastrophes since 1980, triggering $1.1 tillion in damages, according to the global reinsurance company, Munich Re. “Human influence on the climate system is clear, and recent (human) emissions of greenhouse gases are the highest in history. Recent climate changes have had widespread impacts on human and natural systems,” according to the Intergovernmental Panel on Climate Change.

Among climate scientists, 97% agree that climate-warming trends over the past century are extremely likely due to human activities, according to NASA.

And Nebraska is hardly immune.

The nightmare of March 2019 is firmly etched in the minds of most Nebraskans. Images of raging rivers spilling over embankments. Thousands of flooded acres of farmland. Droves of day-old drowned calves. Scores of homes swept away that had stood for generations. Damages surpassing $2.5 billion — including $640 million in roads, levees and other infrastructure, $300 million in agriculture and $400 million in cattle. Floodwaters destroyed or damaged more than 2,000 homes and 340 businesses at a cost of over $170 million.

This is a story about science – about the accumulation of facts generated by scores of scientific studies meticulously compiled by hundreds of scientists filing thousands of pages of reports.

“CO2 emissions from fossil fuel combustion and industrial processes contributed about 78% to the total (greenhouse gas) emission increase between 1970 and 2010, with a contribution of similar percentage over the 2000–2010 period,” according to the fifth IPCC report.

Since the end of the Industrial Revolution in 1840, scientists have studied the effect of CO2 on a warming climate.

In his latest book, “Falter”, Bill McKibben, founder of 350.org, revealed how scientists understood the consequences of increasing CO2 emissions over 50 years ago. To drive home his point, McKibben quotes a 1970s scientific document given to senior Exxon executives.

“There is no doubt that increases in fossil fuel usage and decreases of forest cover are aggravating the potential problem of increasing CO2 in the atmosphere,” McKibben writes. He also quotes a 1982 American Petroleum Institute task force: “There are some potentially catastrophic events that must be considered. Once the effects are measurable, they might not be reversible.”

Greenhouse gas emissions are the highest in history due to human activity, which are having a clear influence on the climate system, according to the IPCC.

These dire warnings brought the global scientific community together to design the most sweeping initiative to fight climate change — the Paris Climate Agreement. In 2015, 196 countries committed to an ultimate goal of keeping global temperatures well below 2 degrees Celsius (3.6 degrees Fahrenheit) of the pre-industrial global average temperatures.

As of April 2020, 195 countries and the European Union have signed the agreement, with the United States withdrawing from the agreement on June 1, 2017. Member nations saw this as a devastating blow to achieving key goals, as the US was a major negotiator in 2015 and currently the second-highest CO2 emitter. President Donald Trump said the agreement “disadvantages the United States to the exclusive benefit of other countries.” In response, French and German leaders expressed their disappointment but doubled down on their commitment to curb CO2 emissions. Chancellor Angela Merkel’s spokesperson said, “Now more than ever we will work for global climate policies that save our planet.” 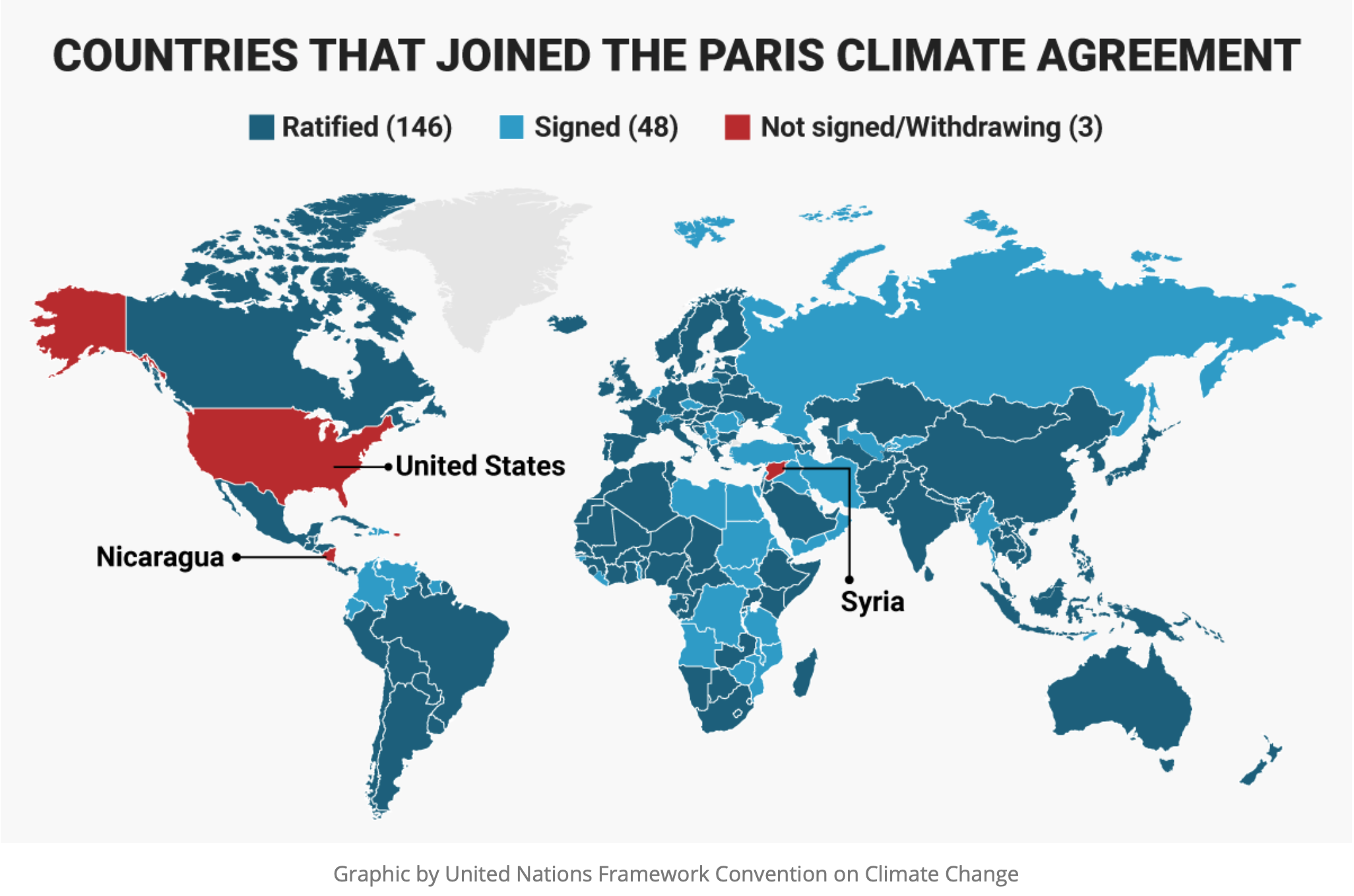 This withdrawal was not disappointing to everyone. One in four US registered voters supported the president’s decision, including Nebraska State Sen. Dan Hughes, who is skeptical about the cause of climate change.

“There’s no question the climate is changing,” Sen. Hughes said. “What is causing it is the contention I have. I do not believe that human activities have that big an impact on the weather … We’re in a very active weather pattern right now, currently. And how long that lasts, I don’t think anybody really knows.”

Those arguing humans are not the primary cause of climate change often cite that climate has always changed.

“The world is getting warmer, but not just due to pollution and greenhouse effects,” said Tanner Lembke, a 25-year-old rancher in Chadron, Nebraska, who took over the ranch in his family for 100 years. “The world goes through hot and cold spikes. But on the same note, I also believe the world is pretty damn good about resetting itself when things aren’t going good.” Scientists agree the climate has always changed and natural cycles influence Earth’s climate. But global temperatures have been rising for the last 150 years. Man’s burning of fossil fuel and increasing atmospheric CO2, scientists say, is the only factor that accounts for this warming. Antarctica and the Arctic both recorded its hottest temperatures in 2020.

However, there are some who don’t believe the science is settled.

Sen. Hughes questions the facts. “I think there’s a lot of people who are cherry picking certain aspects of the way the world is,” he said. “There are lots of climate scientists out there who are saying, you know, this is not that much out of the ordinary.”

Even those not sold on the argument of man-made climate change believe it’s time to discuss solutions.

“I’m sure we do have the effect of changing the environment ourselves, but a lot of finger pointing isn’t helping,” Lembke said. “Stop bitching about it and start doing something.”

And Lembke is not the only one who feels that way. According to a June 2020 Pew Research Center survey, nearly two-thirds of Americans think the federal government should do more to combat climate change, including measures to reduce greenhouse gases.

This is a story about water.

Rising sea levels is one of the greatest consequences of climate change, with an estimated 1 to 3 feet of sea level rise to occur by 2100. Over one-third of the world’s population lives within 60 miles of the coast. More than 600 million people live in New York City, Shanghai, London and Bangkok, all built no more than 3 feet above sea level.

Between November 2019 and February 2020, severe winter flooding hit several parts of Britain, the worst in northern Britain, causing an estimated $165 million in damages. All of this rainfall led to the wettest February (6.68 inches) since records began in 1766. This is a story about fire.

In 2019, the Amazon rainforest experienced one of its warmest and driest periods. This resulted in a massive part of the rainforest becoming a raging inferno, contributing almost as much CO2 to the atmosphere as it typically absorbs from the atmosphere.

On the other side of the world, historic brush fires also ravaged Australia in 2019. Record heat and drought forced thousands to abandon their homes and seek refuge. As temperatures began to fall and Australia entered autumn, over 46 million acres were burned, the air quality index in Sydney reached more than 12 times the hazardous level and over a billion wildlife were killed. Drought is a natural climatic occurrence that is becoming more frequent and more severe throughout the world. In 2019, 45 million people across 14 African countries struggled to find food as droughts spread across East Africa.

This is a story about how scientists believe climate change is giving Mother Nature the power to wreak havoc on the human-made world. And that havoc includes Nebraska.

“We know annual precipitation totals have increased by about 10%,” state climatologist Shulski said. “And we know that that rate of change is accelerating in recent decades as it is with temperature. So, we’re getting warmer and we’re getting wetter and that is speeding up.”

This is a story about Nebraska’s future.

Graham Christensen, an Oakland, Nebraska, farmer who has seen the impacts of climate change firsthand, founded GC Resolve to advocate for and educate farmers and ranchers as climate becomes more extreme.

“We have no choice. (Climate change) is going to happen regardless and Nebraska is well positioned to become a national leader and an example,” Christensen said.

Rather than focusing on the problem of climate change, Christensen said, Nebraskans can focus on the solutions. He said the arguments become unimportant as the mission becomes clear and brings people together.

“They do the right things and the next thing they know after they’re applying these good practices and it works, they’re talking about the reason they did it was for their kids, and so on,” he said.

When John Hansen, a native of Newman Grove, Nebraska, bought his farm from his grandfather, he was told to take good care of the land and the land will take care of him. Hansen is striving to do just that through his work as the president of the Nebraska Farmers Union. Like many farmers, people who have made a living off the land, Hansen has seen the weather changing.

“There needs to be an all-hands-on deck approach to dealing with climate change,” he said.

For Hansen, the time for climate action is now. 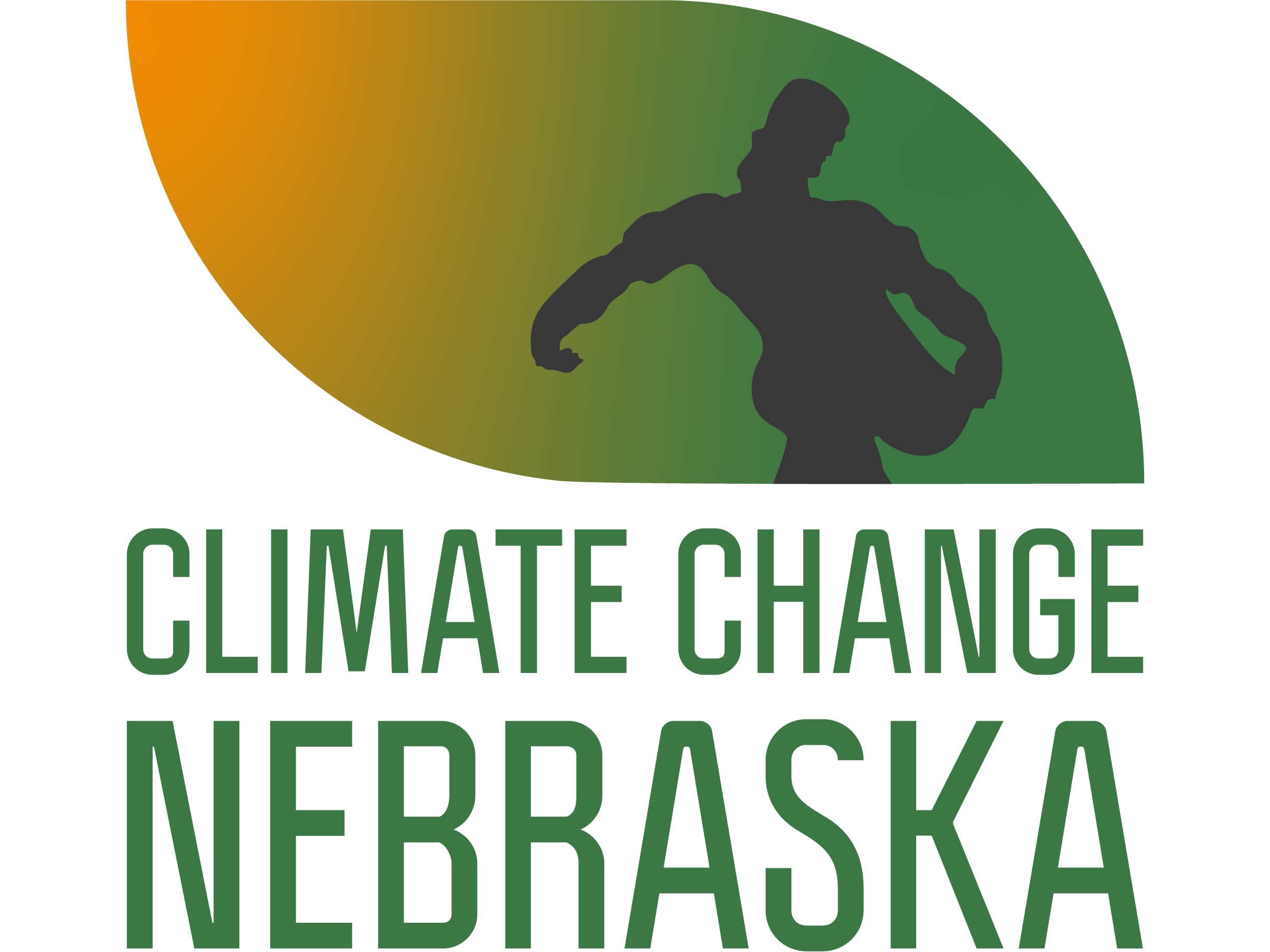