New Costco poultry plant controls everything from the egg to the grocery aisle. Will that help or hurt farmers?

FREMONT, Neb. — Dressed in blue coats, their hair and beards tucked under protective masks, three men quickly hang slaughtered chickens upside down on shackles, beginning a process that soon will be repeated 2 million times a week in this $450 million processing plant. 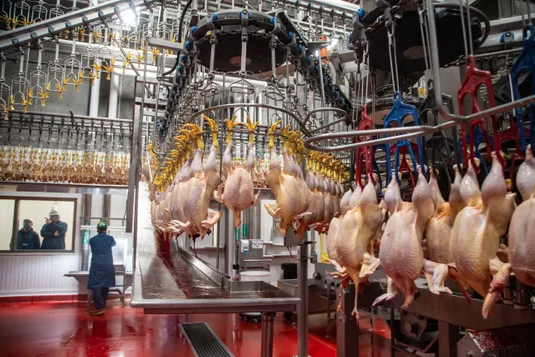 "These are some of the hardest-working people in our facility," said Jessica Kolterman, spokeswoman for Lincoln Premium Poultry, a meat processing company that giant retailer Costco created and financed.

The plant will supply many of the 90 million $4.99 rotisserie chickens Costco sells nationwide each year, as well as provide good-paying jobs for about 1,100 people as the company adds a second shift and doubles production, Kolterman said.

"That rotisserie chicken brings many people in the door. People are very excited about it," she said, noting that the product has its own Facebook page, with about 18,000 followers.

The plant, which began operating in September, also brings economic opportunity to Iowa and Nebraska farmers, who are investing millions of dollars in barns that will house tens of thousands of chickens, she said.

But critics say Costco's new poultry plant pushes vertical integration to extremes, controlling production from the farm to the grocery aisle. It goes beyond Walmart's recent moves to build its own beef and milk processing plants, which buy directly from cattle and dairy producers.

In addition to processing at Lincoln Premium's site, workers run a hatchery that provides farmers the chicks, and they process the grain that's supplied to farmers. And the company provides the veterinarians, medicine and other supplies farms will use. About six weeks after delivering the chicks, Lincoln will pick them up.

"It rigs the marketplace," said Adam Mason, policy director for Iowa Citizens for Community Improvement, a community action group. "The farmer on the ground will be subject to lower and lower prices, since there's no place to negotiate something different."

Mason and others say Costco's production model duplicates one that has bankrupted poultry farmers in the southeastern U.S. broiler belt. It forces farmers to compete with each other while incurring significant debt to build the production facilities the company requires.

"What's to stop any giant food conglomerate from using this model moving forward, pushing even more farmers out of business?" he said. "If you can put more and more livestock in a barn, with one farmer instead of 10, that lowers your input costs."

Kolterman said Costco and Lincoln Premium provide profits to farmers at a time when they're fleeting. Last year, many farmers received government aid to help offset losses from trade wars. Even so, U.S. farm income was about 30% lower than in 2013, its record high. "It's been an opportunity for families to bring kids home to the farm — that additional income," she said.

'This is what gave me the opportunity'

Mike Dickinson, who lives near Logan, a town of 1,400 in western Iowa, built four barns housing about 42,000 birds each near his home in Harrison County. That's nearly 170,000 chickens altogether. It was the smallest investment Costco allowed, he said, noting that some producers have built as many as 16 barns.

Kolterman said up to 80 farmers will operate about 520 barns to feed the plant, with farmers raising a new flock of birds every 45 days or so. She was unable to say how many producers are in Iowa.

Dickinson said raising chickens for Costco has let him quit his part-time job as a registered nurse and farm full-time with his father.

"I always was driven to come back to the farm ... and this is what gave me the opportunity," said Dickinson, who worked as a nurse in Omaha for 13 years. He also sells cover crop seeds, runs a cow-calf operation, and grows corn and soybeans with his family.

Christensen, who also farms, said Lincoln Premium and the farmers contracting with the company have provided little notice to their neighbors about their plans and have failed to fully answer residents' questions about the intensive new operations.

"A lot of people felt like these barns were shoved down their throats," Christensen said, adding that local Nebraska leaders have rejected some projects because the facilities were too close to neighbors or residents were concerned about the added truck traffic around schools.

In Nebraska, in areas that have zoning laws, local leaders can decide if a livestock facility should be built.

In contrast, Iowa has a statewide master matrix, a scoring system that establishes uniform rules about where CAFOs can be constructed. Critics say the rules are too lax and have unsuccessfully lobbied for more local control over siting confinements.

Christensen said Nebraska hasn't seen the massive buildup of CAFOs that Iowa has. And Nebraska wants to avoid it, he said.

"We are looking to increase business, to increase agricultural opportunities in rural areas, including livestock," Christensen said. "But we don't want to do it in a way that jeopardizes our way of life, changes our culture and threatens our health."

Iowa, the nation's largest pork and egg producer, has about 12,000 CAFOs that house millions of pigs, laying hens, pullets (young hens that aren't yet laying eggs) and turkeys. Critics say runoff from those facilities and from fertilizer used to grow corn contributes to Iowa's water-quality problems.

High nitrogen levels in the Raccoon and Des Moines rivers have forced Des Moines to invest millions of dollars in one of the nation's largest nitrate removal plants to ensure the city's drinking water is safe.

The nitrogen load also leads to algae blooms across the state and downstream in the Gulf of Mexico, where it contributes to a dead zone that extends for thousands of square miles from the mouth of the Mississippi River.

Some residents in Iowa, Nebraska and elsewhere have called for a moratorium on new animal feeding operations. U.S. Sen. Cory Booker of New Jersey, who unsuccessfully ran for the Democratic presidential nomination, also has pushed for a moratorium. The Iowa Legislature, with a Republican majority, has largely ignored the request.

Dickinson said he reached out to all his neighbors before building the chicken facilities, which sit near his home. "I wanted to be open and transparent," he said.

Chicken production has helped diversify his business, he said. "In our county, a lot of the people who have gotten involved in the (Costco) project have really focused on being good stewards of the animals and the environment," he said.

Dickinson, for example, will apply chicken litter from his barns this spring to the cover crops he planted last fall to hold the soil, and nitrogen and phosphorus, in place. The cover crop, cereal rye, also gives his cows and calves something to graze on this spring.

Growers use wood shavings to compost the chicken manure inside the barn all winter long. The process kills much of the ammonia and bacteria that cause smell complaints, Dickinson said.

Iowa and Nebraska agencies regulate how farmers store and apply chicken litter and other manure fertilizer, along with requiring periodic soil testing to help prevent manure from being over-applied. But Mason's group says the state rarely checks to ensure manure management plans are followed.

Kolterman said the company also uses a model developed at the University of Nebraska to create an "odor footprint" for each animal feeding operation to ensure neighbors aren't bothered by smell.

She said the odor typically doesn't extend beyond a quarter to a half mile beyond a barn.

"We can show you definitively on a map where the smell will be 95% of the time," she said, adding that the only people who live inside the odor footprint are the farmers who run the operations.

Kolterman said just because animal feeding operations are large "doesn't mean it's not a good operation and well-run and safe."

The scale of "agriculture is growing. We don't produce food the way we produced food 50 years ago," she said.

Claire Kelloway, a researcher at Open Markets Institute, an anti-monopoly think tank, said Costco has adopted an industry model that has "proved to be a financial death trap for farmers."

Some poultry companies have used a competitive pay system that pits farmers against one another, she said, paying some farmers more for their birds while docking others, based on performance. Critics say the companies' decisions are arbitrary.

In addition, they say, companies have called for farmers to make expensive improvements that have left the farmers saddled with debt, and with little recourse.

David Anderson, an agricultural economist at Texas A&M, said farmers who contract with Costco, Walmart or large meatpackers face significant risk. "You may borrow a million dollars to build those houses, so you need chickens delivered to you to raise," he said.

But "if there's an economic slowdown ... and the company starts cutting back production, it might not deliver birds to you, and you need those birds to pay off your note," Anderson said. "It's not a risk-less investment ... but there's lots of examples of people who have done well."

Dickinson, aware of some problems within the poultry industry, said he talked with producers across the country and researched contracts before investing in the chicken barns.

He said Lincoln's fee structure is higher than the industry standard. He expects to make a profit, even as he pays off his chicken barn debt.

Kelloway said she hopes that's the case, though she has doubts. "Costco is promising higher pay, but it’s not clear to me that farmers really will be able to pay back their debt on these expensive chicken houses and fare better than other poultry farmers," she said.

Kolterman, however, said the company's success depends on farmers' success. Lincoln's partnership with farmers is like a marriage, she said, "where there's give and take. We work with them. We learn from them. We strive for open dialogue."

Both the farmer and company can back out of the agreement if either is unhappy, she said.

Kelloway, however, said poultry farmers will have few options if they're not doing business with Costco, since the company has created an industry in Nebraska that didn't previously exist.

"Farmers only have one buyer," she said. "It's not a competitive market. That power is concerning."

'Costco has a reputation for treating workers well'

Farmers aren't the only ones who benefit from the processing plant, Kolterman said.

The plant is expected to have a regional economic impact of $1.5 billion annually.

Costco chose the Nebraska location because of the availability of corn and soybeans, water, labor and farmers, Kolterman said.

Production workers, who start at $15 an hour, plus health care insurance and other benefits, tell her they're getting better pay than they did before. They're buying homes.

"People are really pleased to have this opportunity," Kolterman said, adding that the plant also is bringing new workers into the state, which has struggled to grow its population.

Kelloway questioned how much the plant is helping Nebraska, pointing to two North Carolina investment groups that she estimates are building several dozen of the chicken facilities for Costco. "Those profits will just flow out of Nebraska," she said.

Kolterman said the out-of-state investors will partner with local farmers as well as bring families to Nebraska to help run the groups' facilities and employ local workers.

Despite her reservations, Kelloway hopes Costco's model treats farmers fairly, adding that Costco's direct connection from farmers to customers should help keep the retailer accountable. "Costco has a reputation for treating workers well, offering better wages than its retailer competitors," she said.

"I think they've tried to separate themselves as having a more generous model of contract poultry production. I would love to see that be the case," she said.