Christian Science-Monitor on Why We Wrote This

"The severe flooding that inundated Nebraska last month washed away fields, bridges, and roads. But the extreme weather is also starting to sway residents’ thinking about climate."

The flood carried away edges of his fields, dumped up to 6 inches of useless sand on his fertile loam, and deposited, incongruously, the elastic band of a pair of Hanes underwear on a bush. But everywhere Chad Christianson looks, all he sees is green. 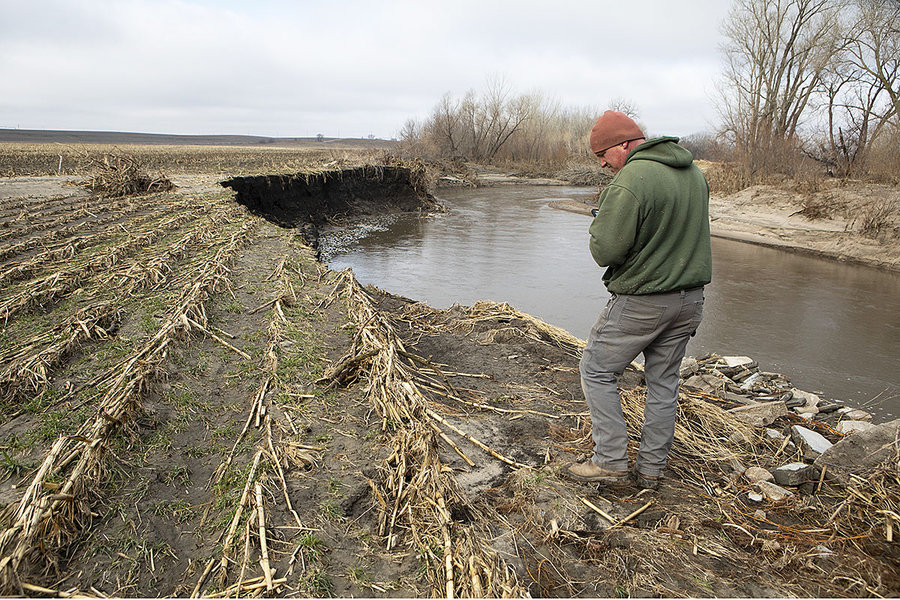 Corn and soybean farmer Chad Christianson looks at the erosion of his cornfield from the flooding of Maple Creek, on April 2 in Fremont, Nebraska. Many parts of the state flooded after heavy rains hit frozen, saturated ground.  (Photo: Melanie Stetson, Freeman/Staff)

The green rye he planted last fall stands in sharp contrast to the brown soil and cornstalks. More importantly, it held the soil in place in all but the most flooded areas of his fields, lessening the waters’ impact. It’s a first step in Mr. Christianson’s push to become more weather-resilient.

“I don’t know about climate change,” Mr. Christianson says. “But I think the weather is going to be more extreme going forward.”

It’s a sentiment that is percolating here in rural Nebraska. With the state still in recovery mode, many Nebraskans say it’s early for them to start contemplating the long-term implications of last month’s epic flood, the most widespread in memory. But as such extreme weather events pile up, some say they are beginning to change hearts and minds here – not politically but practically.

“This [flood] didn’t come out of nowhere but it went beyond almost anyone’s expectations,” says Tyler Williams, an educator with the extension service at the University of Nebraska-Lincoln, which works with farmers. “So I definitely think people in the agricultural world are thinking: ‘All right. I’ve got to fix something, do something different.’”

Part of the change in thought is coming from farmers themselves, especially those involved with the small but growing regenerative farming movement.

The movement, which focuses on the health of soil, emphasizes techniques like planting cover crops as a way to keep more roots in the soil, beyond the corn and soybean plants that many farmers raise in rotation. These roots keep more nutrients in the soil, make it easier for water to drain (which improves flood resilience), and keep more water stored in the soil (which improves drought-resistance). That’s key for farmers like Mr. Christianson here in Fremont. 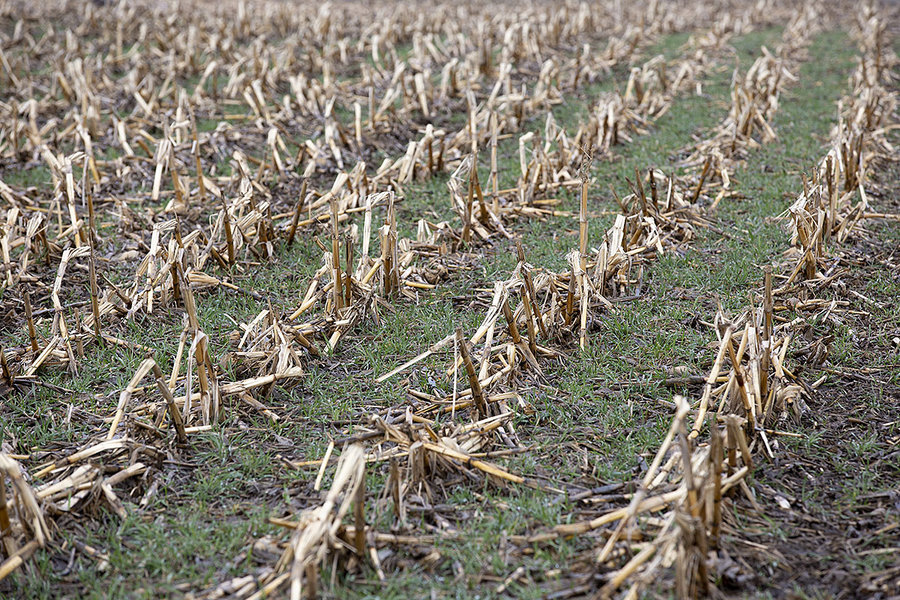 The term climate change has become so politicized that it’s not readily accepted in rural America, even with the extreme weather. Most pastors in the state are afraid of addressing the issue for fear of splitting their congregations, according to a 2015 University of Nebraska-Lincoln report.

A couple comes out of a Lynch, Nebraska, donation center with six gallon jugs of emergency water because the floods have intermittently made their water unsafe. Does the extreme weather imply climate change? “No,” she answers. “No,” he answers, then gives a short lecture on avoiding preconceived ideas.

Skeptics have a point. Last month’s flooding was the result of such a fluky combination of snow, rain, frozen ground, and rapid melt that even warming advocates admit that it alone may not be a harbinger of change to come. But previous events – flooding of the Missouri River in 2011, an increasing number of intense rain events, and one of the 10 coldest Februaries on record – have residents reassessing the future.

“It’s getting to the point where it’s hard to ignore,” says Kim Morrow, a behavior change expert at Verdis Group, a sustainability and climate resiliency advisory group based in Omaha.

When Yale University social scientists assessed public opinion about climate change last year, they found that 64% of Nebraskans believed climate change was happening. That was up 6 points from their 2014 survey – a rise consistent with the slow change in a swath of red states from Idaho to Kentucky – but still 6 points behind the national average.

The Yale research also reveals an urban-rural split. In Lancaster County, home of Lincoln and the university, 72% of people said change was happening. In rural counties farther west, barely half do.

“Yes, I think it’s still political and divided, but people are beginning to change,” says the Rev. Richard Randolph, senior pastor at Christ United Methodist Church in Lincoln. He has submitted to this year’s Nebraska-Kansas annual conference of the United Methodist Church a petition calling on churches to become better informed about global warming and to set goals for reducing their carbon footprints. “For the most part, I pastor a church that’s moderate to progressive theologically. And so I think if anything, my congregation is sometimes frustrated with me for not being more out there on global warming.”

But the Rev. Andy Alexander, director of the Collaborative Ministry Office at Creighton, a Catholic university in Omaha, is not seeing much of a shift at all. “People are skeptical about that kind of thinking, which they call projection,” he says. Even if they acknowledge they need to be more prepared for chancier weather in the future, they’re not making a link between their present practices and warming.

“I don’t hear people saying our use of fossil fuels is leading to this problem,” he says. And they’re not making the broader connections Pope Francis has made between warming’s impact on the poor and the selfishness and greed that keeps nations from reducing that impact by changing their ways, he adds. “I don’t hear anybody saying that.”

This article was published April 16, 2019 by the Christian Science-Monitor.
By Laurent Belsie Staff Writer
@lbelsie