Graham Christensen sits in the machine shed at his family farm outside Oakland, NE. The farm his Great Grandfather, Christian Christensen, settled to from Denmark in 1867. “They escaped persecution,” he said. “I still have the paperwork that says, ‘It is bona fide my intention to become a citizen of the United States, and to renounce and abjure forever all allegiance and fidelity to all and any foreign Prince, Potentate, State and Sovereignty whatever, and particularly to the King of Denmark of whom I was a subject.’” 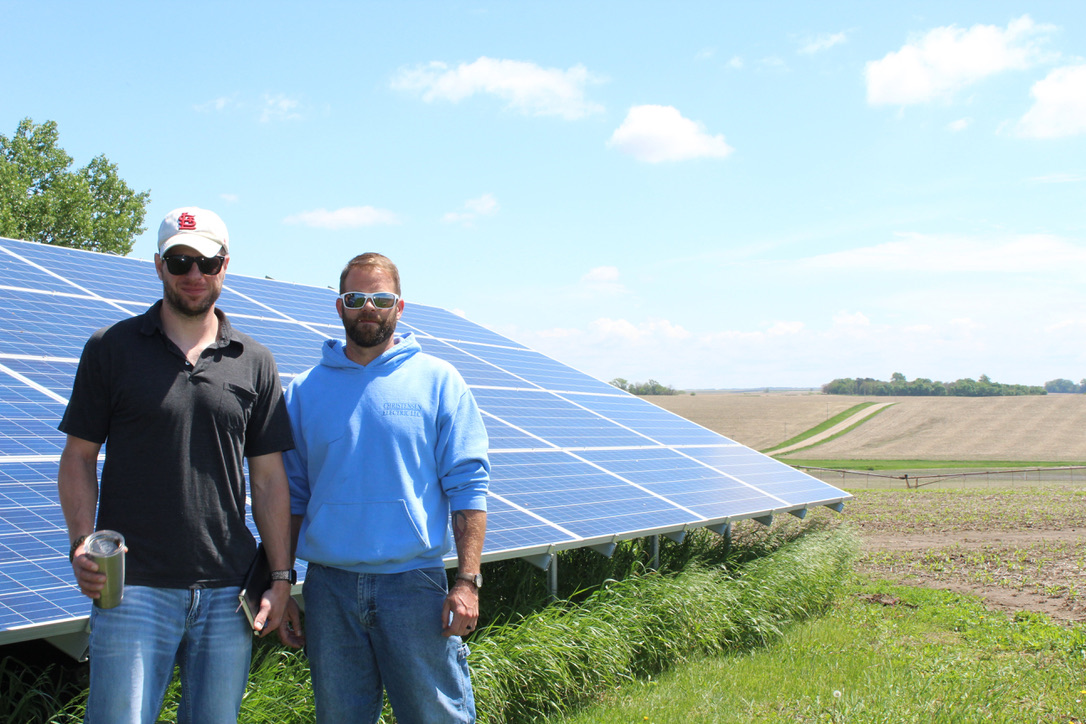 Graham Christensen and his brother Max work together to install solar projects like this one at their farm.
(Photo: Kerry Hoffschneider)

“I think we are forgetting the reason our ancestors came here,” he added, looking out at the farm that he and his brother Max have vowed to never let out of the family.

Freedoms are important to Christensen – freedom of expression, thought and for farms to belong to individuals to steward in an ecological sense. It was the serious and real threat of climate change that spurred him to create, GC ReVOLT (a solar business) and GC Resolve (a grassroots community activism effort). He is what a growing number of leaders passionate about rural America look like – independent, creative, open and tired of archaic policies, protectionist institutions and lack of diversity.

Christensen was born in 1979 and grew up surrounded by activism at a time when many of his neighbors were losing or fighting for their farms. His formative years were spent riding along with his parents who were active with the American Ag Movement, Nebraska Farmers Union and many other organizations. He can remember tractorcades, trips to Washington D.C. and his father’s late night organizing of potlucks to engage fellow farmers to become involved in the world of what was going on, or not going on, with ag policy.

The struggles of a tornado hitting their farm, his parents severely injured in a car accident (that left them both with broken necks and a long road to recovery), and historically low commodity prices for over a decade, enabled the Christensen family to grow strongly together. He grew up in the Methodist Church, and like most farm families, faith and family became a grounding staple in his life.

Christensen also learned of his adoption at a young age, “I asked my dad about the birds and the bees checking corn one day when I was very young, and he told me I was adopted.” Not unlike other adopted children, Christensen was curious to make a connection with his roots and eventually met his biological mom, a Bohemian Lithuanian, who grew up in South Omaha.

Like many young adults, Christensen thought the grass was greener elsewhere and spent one month in California before he was called back home. He missed his family and the farm. Journalism took a rest while he helped his dad on the farm, and he worked at a local steel construction company that builds grain elevators. Then, he joked, that he spent, “three years in jail” working in ag financing, realizing quickly that cubicles were not a fit for the athlete with a curious mind and a love for the outdoors.

From there, Christensen continued to connect people to a unified cause and naturally started organizing what at the time was the West Omaha Democrats. Then he caught a break, “Ben Nelson asked me to work on his 2006 U.S. Senate Campaign and so I left ag financing. The campaign was successful, but I had no desire to head to D.C. While in Omaha, I had connected with people in the eastern part of the city who were facing the same issues we were seeing in rural areas – poverty, access to food and healthcare – and, they inspired me.”

With his heart always pulling him home, Christensen found plenty to tackle in his own backyard. He was active in the fight against the Keystone XL Pipeline, started his solar business and GC Resolve. Always seeking to connect the dots and make issues relevant for rural neighbors, he also traveled to Paris to meet with up and coming world leaders about the real impact climate change is having on the globe and how farmers are the solution. His goal now is to help farmers become more “regenerative.”

He’s working on that with his brother Max as they vow to help revive their farm with better soil practices that cleanse the water, all while providing more opportunities through solar and other on-farm innovations that create opportunities for rural areas to spring back to life, “Some of my best memories growing up are swimming in the neighbor’s pond, camping along area lakes, and exploring streams and rivers around home. Here, and across the country, are many bodies of water I wouldn’t even allow my future children to swim in anymore because of bad ag practices influenced by mis-aligned chemical and seed companies. This we must change, and farmers are central to this change. I believe farmers are the heart and soul of our country. After all, we produce the food. However, we must do better, and I won’t give up on that.”

This article was initially published by the York News-Times June 11, 2019
By Kerry Hoffschneider