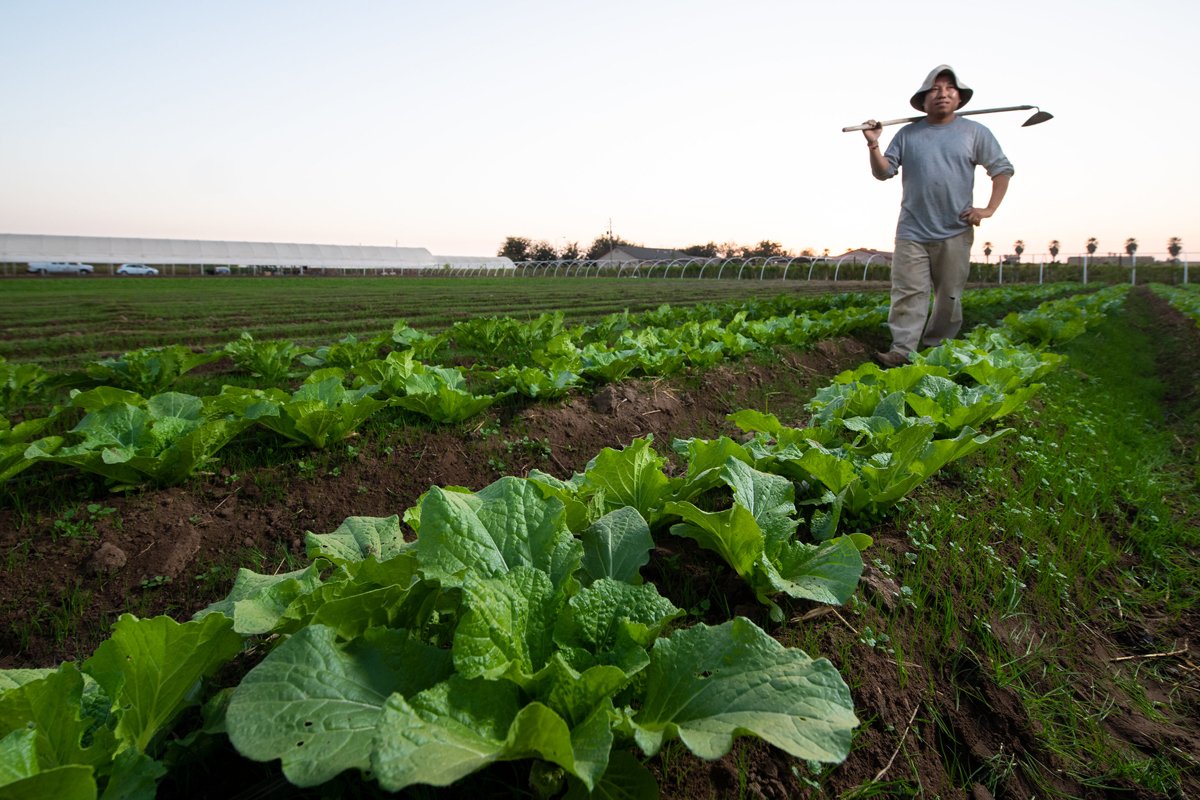 Soil health is crucial to fighting climate change, but a new study finds that funding to support it in the Environmental Quality Incentives Program (EQIP) is lacking.

Ron Rosmann’s 700-acre certified organic grain and livestock farm in Shelby County, Iowa is an island in a sea of very large conventional soy or corn operations. Farmers in the area don’t typically pay a lot of attention to the health of their soil—which has, on occasion, eroded onto his property. Others in the area operate concentrated animal feeding operations (CAFOs). It’s not uncommon, for example, for one of his neighbor’s cattle manure lagoons to overflow into a nearby creek.

While Rosmann is pleased that more farmers there are adopting cover crops to reduce erosion and runoff, it still only amounts to roughly 4 percent of Iowa farms. And he laments that the pace of change toward conservation practices is simply too slow given the region’s mounting water quality concerns.

Part of the problem, he says, is that federal Conservation programs, such as the Environmental Quality Incentives Program (EQIP), don’t offer enough incentives to help farmers make a long-lasting transition to more sustainable practices. “We don’t have the policies and incentives aligned to do things differently,” he says.

A new study backs up Rosmann’s view. Researchers reviewed the farm projects that received EQIP funding between 2009 and 2018 and found that those with the greatest potential to improve soil and environmental health represented between 2 and 27 percent of the total dollars spent. Researchers looked at $7 billion in government spending over the course of the decade and found that soil-boosting practices represented a very small sliver of the pie: In fiscal year 2018, for instance, it represented less than 1 percent of the U.S. Department of Agriculture’s (USDA) total annual expenditures.

“It’s not as much money as you would think given the buzz and hype around soil health,” says study co-author Kate Tully, a researcher at the University of Maryland.

Beyond hype and buzz, however, many in the science and agriculture communities are pointing to soil health as key to helping farms navigate the coming decades. And, as the incoming Biden administration has pledged to make climate change mitigation a central facet of its agriculture agenda, some in the conservation world see a potential opening.

“The time is ripe to rethink and refocus all the working lands programs, and certainly EQIP at the top,” said Duane Hovorka, agricultural program director at the conservation group Izaak Walton League of America.

EQIP, which has been around since 1996, is a cost-share program that was originally designed to deliver improved water quality, increase soil health, create wildlife habitat, and mitigate against drought and weather volatility. But as the authors of the new study found, it has often strayed from those goals in recent years.

The study, published in the journal Frontiers in Sustainable Food Systems, catalogued and ranked the projects funded by the EQIP program and singled out those that “have the potential to reduce erosion and soil disturbance and or increase agrobiodiversity.”

The study found that some EQIP-supported practices can be bad for soil health, such as deep tillage, which reclaims toxic soils but may create significant erosion.

“Half the funding had no relation to soil health,” says study co-author Andrea Basche, a researcher at the University of Nebraska in Lincoln. For example, EQIP supports only about 10 percent of the cover crops farmers plant, which as of 2017 was roughly 15 million acres, despite the fact that they have been shown to bring a range of soil and water quality benefits. (Some states, however, have made more direct support for cover crop adoption a priority.)

The study also found that some practices supported by EQIP are generally considered counterproductive to soil health. The biggest surprise to Tully was that EQIP funds practices such as deep tillage, for example, to reclaim toxic soils, but “deep tillage goes against everything this program is supposed to be doing,” she says. While it may bury toxic compounds, such as heavy metals, deep tillage often leads to significant erosion.

EQIP has generally been a popular program with farmers. Between 2009 and 2018, more than 384,000 farmers and ranchers received contracts to support conservation efforts on more than 115 million acres. In fiscal year 2018 alone, over $1.87 billion in financial and technical assistance supported at least 42,800 EQIP contracts covering more than 13.6 million acres.

But when you look at the top 10 practices—including water storage facilities, irrigation systems, fencing, or livestock pipelines—six were related to building or improving structures and facilities; not many were farm field practices supporting soil health, adds Tully.

“I came away thinking we could invest our dollars in a way that would have broader public benefits,” says Basche.

Tim Gibbons, communications director for the farm member organization Missouri Rural Crisis Center, pinpoints the 2002 Farm Bill as the moment when EQIP veered from its original conservation intent into something broader.

“EQIP started in 1996, [it was] put forth and championed by family farm and environmental protection groups,” says Gibbons. Initially, the program offered to split the cost of projects up to $50,000 [over a 5-year period] and was not initially open to CAFOs.

However, Hovorka explains that the 2002 Farm Bill eliminated the restriction on large CAFOs, raised payment caps to $450,000 over five years, and reserved 60 percent of EQIP funding for livestock practice, including waste management facilities. When CAFO waste lagoons scored poorly for EQIP funds, NRCS state offices started setting aside some of their EQIP money specifically for CAFO applications so they only competed against each other.

In 2018, federal EQIP funding going to livestock operations was reduced from 60 to 50 percent. But public dollars are still going to offset the waste management costs of industrial livestock operations—something Gibbons and others find troubling given the hidden environmental costs of CAFOs.

“Our tax dollars should not go to mitigate the negative environmental impacts that industrial factor farms are creating,” he says. Essentially, Tully says, CAFOs get paid not to pollute.

Missouri is home to roughly 100,000 family farms and 500 CAFOs, according to Gibbons. In recent years, he’s has served on the state technical committee for the USDA’s Natural Resources Conservation Services (NRCS) in Missouri and worked to limit the percentage of EQIP dollars going to CAFOs.

“We want to see the 50 percent of EQIP dollars meant for livestock operations to go to pasture grazing as opposed to waste management,” he says. The committee’s efforts are working, he says, reducing the amount of EQIP funding going to corporate, factory farm livestock waste projects in Missouri from 35 percent to 15 percent over the last few years.

As Gibbons sees it, independent producers are more likely to steward their land to be more resilient in the face of extreme weather. “A solution to climate change is having hundreds of thousands of family farmers getting paid a price to do the best conservation and to stay on their farms and pass down to the next generation,” says Gibbons.

“That the tension in that program,” says Hovorka. “We spend some EQIP money on really good practices and help farmers implement good conservation practices, but we also spend a fairly large chunk on practices that don’t give us natural resources benefits.”

For example, farmer Ron Rosmann did explore using EQIP dollars to put in a pond recently, in hopes of irrigating his crops as the climate changes. But the NRCS team estimated the potential cost at $75,000 to $110,000 to make a 3-acre pond with a dam to drain 280 acres. Rosmann wasn’t interested in a lake, and with that hefty of a price tag, it didn’t get funded. He says the NRCS approach is often inflexible, and projects often spiral in scope—with the result that a few big projects inevitably end up competing with each other for the available money. As a result, the money may not generate the biggest conservation bang for the buck.

Beyond meaningful updates to encourage broader adoption of soil health-building practices through EQIP and the Conservation Stewardship Program, Hovorka has been advocating for a National Soil Health Initiative. It would be partly a public outreach and education effort using existing programs, such as EQIP, to help farmers create a soil health plan that would, for example, stack no-till, cover crops, diversified crop rotations, and reduced chemical inputs.

“The best thing USDA could do for farmers and natural resources is focus working lands programs on soil health.”

“The best thing USDA could do for farmers and natural resources is focus working lands programs on soil health,” says Hovorka. “The neat thing about soil health is it gets broad bipartisan support.” Most importantly, he adds, farmers are starting to see the economic benefits of implementing soil building practices.

Kristopher Reynolds, Midwest regional director of the American Farmland Trust, says nothing will help farmers make long-lasting transitions to conservation practices like improving their own bottom line. But, he says, there is one missing ingredient—technical assistance. Quite frankly, he notes, state conservation districts as well as NRCS have reduced the number of technical staff able to help farmers navigate how best to do things like terminate a cover crop in the spring or manage glyphosate-resistant weeds without tillage.

“Climate change has reduced the number of suitable days for planting in the Midwest,” says Reynolds. “Couple that with more frequent, larger rainfall events in spring, and it becomes challenging,” As a result, farmers find it easier to till when it’s too wet—but that necessitates tilling again to take care of compaction caused by the spring tillage.

Conservation practices require additional management, and therefore we need structures and technical staff in place to help farmers or they won’t make the transition, says Reynolds.

At the same time, farmers desperately need to more broadly adopt soil conservation practices to rein in environmental problems, such as nitrogen pollution in waterways and the annual dead zone Gulf of Mexico. “Soil health is at the nexus of climate change, human health, water quality—a lot of wicked problems,” says Tully. Making sure that government spending addresses that nexus would offer more return on investment for the billions we spend every year, adds Basche.

Rosmann agrees. And he emphasizes the urgent need to make the NRCS programs more effective. “We need transformational change,” he says. “We gotta move faster and with more incentives.”